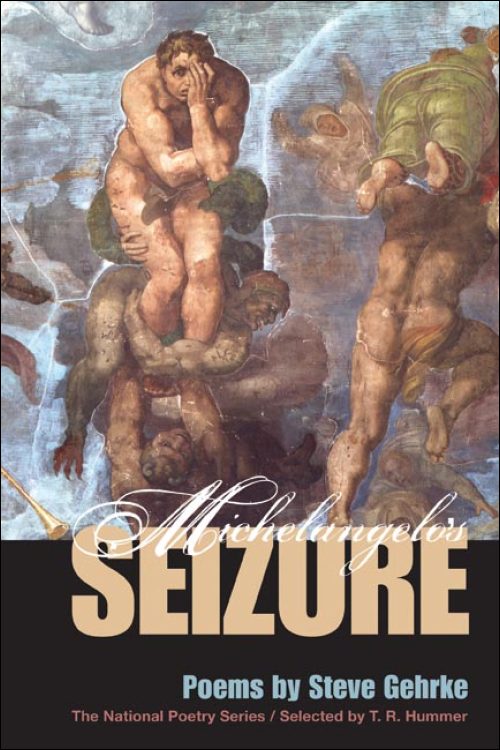 In Michelangelo's Seizure, Steve Gehrke seizes the lives of a number of classic and contemporary painters--from Caravaggio to Magritte, Francis Bacon, and Jackson Pollock--to demonstrate how these artists transformed physical, psychological, and political suffering into art. Mirroring the brushstrokes in long, metaphor-laden sentences, Gehrke moves freely through the canvas, into and out of the artists' lives, into the public realm, into history, to capture the way the creative mind can transform even the most violent surroundings--a prison cell, a battlefield, a madhouse--into a masterpiece.

Steve Gehrke lives in South Orange, New Jersey, and teaches at Seton Hall University. His first book, The Resurrection Machine, won the 1999 John Ciardi Prize for Poetry, and his second, The Pyramids of Malpighi, won the 2002 Philip Levine Prize in Poetry. His other awards include a Pushcart Prize and a grant from the National Endowment for the Arts.

"These brawny, ekphrastic poems trace the artistic endeavors of several great artists, including Rembrandt, Turner, and Mapplethorpe, and portray art as the grueling work that transforms suffering into beauty."--Library Journal

"The poet manages to create a kind of double-imaging that oscillates between painters and subjects, between lives and painting. . . . Gehrke contributes a verbal resonance, in effect an interior voice . . . to all these reverberating images."--Parnassus

“Steve Gehrke has delivered up a masterpiece of masterpieces, a book made up entirely of ekphrastic poems which is altogether unsettling, unfamiliar, uncanny, powerful. The secret of Gehrke’s method is the force of his gaze, which within the dramatic illusion of such poetry is a stand-in for the mind; in these poems artworks melt under the pressure of the writer’s consciousness of them, and products are re-rendered as pure process.”--T. R. Hummer, author of The Infinity Sessions

A Q & A with Gehrke at Poetry Post blog