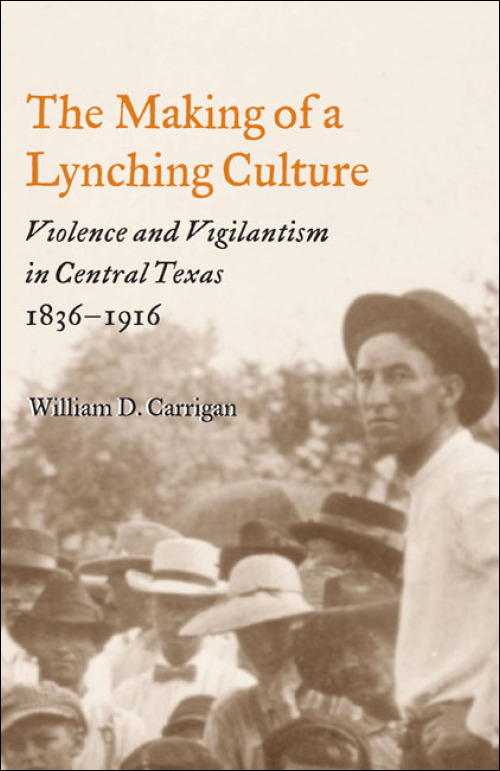 On May 15, 1916, a crowd of fifteen thousand witnessed the lynching of an eighteen-year-old black farm worker named Jesse Washington. Most central Texans of the time failed to call for the punishment of the mob’s leaders. In The Making of a Lynching Culture, now in paperback, William D. Carrigan seeks to explain not how a fiendish mob could lynch one man but how a culture of violence that nourished this practice could form and endure for so long among ordinary people.

Beginning with the 1836 independence of Texas, The Making of a Lynching Culture reexamines traditional explanations of lynching, including the role of the frontier, economic tensions, and political conflicts. Using a voluminous body of court records, newspaper accounts, oral histories, and other sources, Carrigan shows how notions of justice and historical memory were shaped to glorify violence and foster a culture that legitimized lynching.

William D. Carrigan is an associate professor of history at Rowan University in Glassboro, New Jersey, and the editor of Lynching Reconsidered: New Directions in the Study of Mob Violence.

“The Making of a Lynching Culture ranks among the best local studies of lynching and will be of great interest to students of Texas history and the history of violence in the United States.”--Journal of American History

"Writing in a crisp, clear style and demonstrating an impressive mastery of a wide range of primary and secondary sources, Carrigan raises several important questions about the evolution of the lynching culture in the South. . . . The quality of the research makes this study a detailed and judicious work that opens new paths for further work and enhances our global comprehension of this tragic phenomenon."--Journal of Social History

"This is a carefully researched, well-written, and insightful study. Carrigan's masterful treatment of violence, race, and memory warrants a wide readership. . . . Carrigan is to be complimented for shedding new light on the darker side of Texas and American History."--Western Historical Quarterly

Winner of the Richard L. Wentworth Prize in American History, 2005.