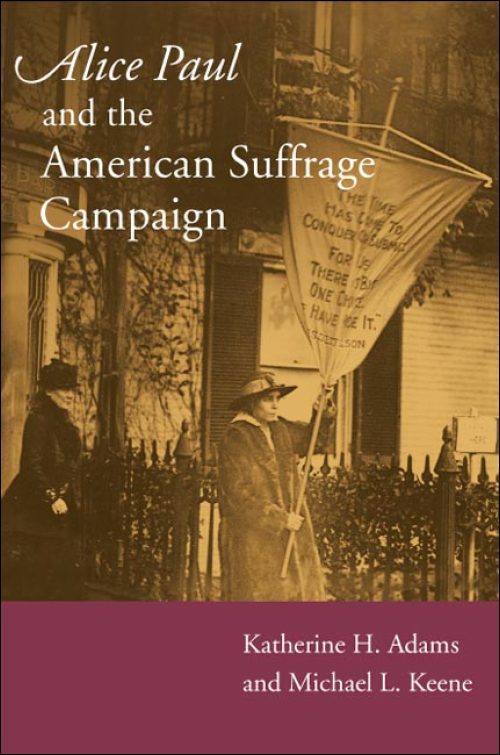 Past biographies, histories, and government documents have ignored Alice Paul's contribution to the women's suffrage movement, but this groundbreaking study scrupulously fills the gap in the historical record. Masterfully framed by an analysis of Paul's nonviolent and visual rhetorical strategies, Alice Paul and the American Suffrage Campaign narrates the remarkable story of the first person to picket the White House, the first to attempt a national political boycott, the first to burn the president in effigy, and the first to lead a successful campaign of nonviolence.

Katherine H. Adams and Michael L. Keene also chronicle other dramatic techniques that Paul deftly used to gain publicity for the suffrage movement. Stunningly woven into the narrative are accounts of many instances in which women were in physical danger. Rather than avoid discussion of Paul's imprisonment, hunger strikes, and forced feeding, the authors divulge the strategies she employed in her campaign. Paul's controversial approach, the authors assert, was essential in changing American attitudes toward suffrage.

Katherine H. Adams is William and Audrey Hutchinson Distinguished Professor in the department of English at Loyola University, New Orleans, and is the author of several books, including A Group of Their Own: College Writing Courses and American Women Writers, 1880-1940. Michael L. Keene holds the John C. Hodges Teaching Chair in the department of English at the University of Tennessee and is the author of Successful Writing.

"The book's authors provide a thorough examination of two aspects of Paul's work for suffrage: her reliance on nonviolence as the foundation for her campaign and her use of 'visual rhetoric' to advance the cause."--Journalism History

"The full story of the final decade of the women's suffrage movement has yet to be told and understood, and Alice Paul and the National Women's Party (NWP) have been particularly neglected. This work does an excellent job bringing this history to the reader in a highly engaging manner. The detailed look at the behind-the-scenes processes of NWP's lobbying effort is stunning!"--Amy Slagell, coeditor of Let Something Good Be Said: The Speeches and Writings of Frances E. Willard