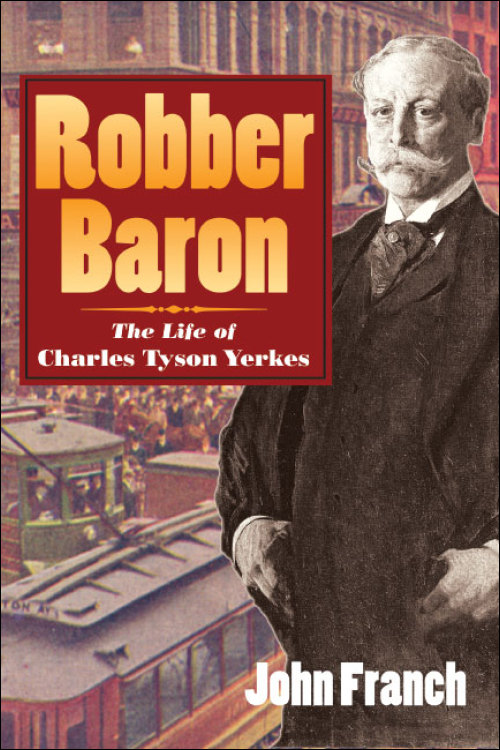 Robber Baron is the first biography of the streetcar magnate Charles Tyson Yerkes (1837-1905), who stands alongside J.P. Morgan and Andrew Carnegie as one of the most colorful and controversial public figures in Gilded Age America. John Franch draws upon every available source to tell the story of the man who was the mastermind behind Chicago’s Loop Elevated and the London Underground, the namesake of the University of Chicago’s observatory, and the inspiration for Frank Cowperwood, the ruthless protagonist of Theodore Dreiser's Trilogy of Desire: The Financier, The Titan, and The Stoic. Despite various philanthropic efforts, Yerkes and his unscrupulous tactics were despised by the press and public, and he left Chicago a bitter man. While Yerkes’s enduring public works testify to his success and desire to leave a lasting impression on his world, Robber Baron also uncovers the cost of this boundless ambition.

John Franch is coauthor of An Illini Place: Building the University of Illinois Campus.

"A welcome addition to the surprisingly small shelf of full-length biographies of Chicago's storied entrepreneurs and can be read for profit by anyone intrigued by one of the most notorious of the men to have built the material foundations on which the city's prosperity has come to rest."--Chicago Tribune

"A superb biography: The research is thorough, the prose is clear, the narrative is compelling and the judgments are fair."--Wall Street Journal

"A fascinating window into the workings of laissez-faire capitalism. Yerkes, one of the most notorious self-made men of nineteenth-century America, embodied the drive, avarice, and unscrupulousness of his age--taking each to its limits. . . . Franch's narrative of the ups and down of Yerkes's career is well written and has considerable dramatic tension."--Enterprise & Society

"It's a fascinating tale of wheeling and dealing in the Gilded Age."--Sky & Telescope Magazine

"The biography that this rich subject deserves"--Railroad History

"Biographies of American capitalists are having a big impact today. Robber Baron is well-constructed and lively, and will fill an important gap in the historical literature of the Gilded Age."--Roger A. Bruns, author of The Damndest Radical: The Life and World of Ben Reitman, Chicago’s Celebrated Social Reformer, Hobo King, and Whorehouse Physician

Named Book of the Year by the Illinois State Historical Society (2007).