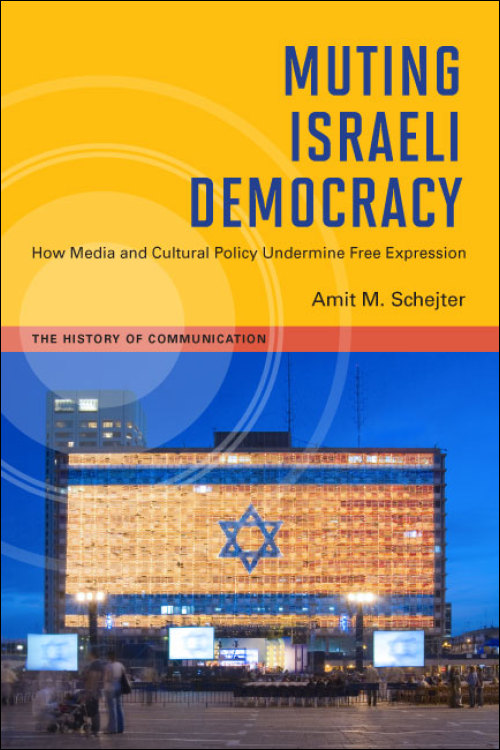 Analyzing a wide range of legal documents recorded in Israel from 1961 to 2007, this book argues that the laws governing Israeli electronic media are structured to limit the boundaries of public discourse. Amit M. Schejter posits the theory of a "muted democracy," one in which electronic media are designed to provide a platform for some voices to be heard over others. While Israel's institutions may be democratic, and while the effect of these policies may be limited, Muting Israeli Democracy demonstrates in scrupulous detail how free speech in Israel is institutionally muted through the constraints and obligations set on electronic media to ensure the continued cultural domination of the Jewish majority and its preferred hegemonic interpretation of what Israel means as a Jewish-democratic state.

Amit M. Schejter is an associate professor of communications and co-director of the Institute for Information Policy at Penn State University and a former attorney specializing in Israeli telecommunication and media law, policy, and regulation.

"The author displays enviable intellectual courage by sharply indicting Israel's broadcast media policies, despite being himself Jewish and a true believer in the Zionist idea of an independent homeland."--International Communication Research Journal

"This book addresses a critical feature of democracy and illustrates a frightening reality: despite the democratic nature of the State of Israel, Israeli media falls terribly short when dealing with the minority Arab population."--Jewish Book World

"Few are as experienced and and expert as [Schejter] is in the everyday realities of the Israeli media from the inside. His familiarity with the media institution from the inside renders the book particularly important and validates its main thesis. . . . The book challenges researchers' knowledge of Israeli democracy and provides an insightful overview of the Israeli broadcasting media."--Israel Studies Forum

"An excellent addition to the comparative literature on media regulation and free speech rights."--Free Speech Yearbook

"A refreshingly critical view of Israel as a 'muted democracy.' This newly coined term is likely to transcend the Israeli case, which is nevertheless fascinating in several unique ways. The book is likely to draw a heated debate not only among theorists of media policies and freedom of expression but also within the Israeli public sphere. If it does, this book could help combat the very evils it diagnoses."--Fania Oz-Salzberger, author of Israelis in Berlin

"Unveiling the case of Israel, Schejter offers a fascinating analysis of the media and media law in a vibrant sociopolitical context. It is a must read to observers, students, and scholars of comparative media studies, politics, and law."--Gad Barzilai, author of Communities and Law: Politics and Cultures of Legal Identities

"A fascinating and highly readable contribution to our understanding of the fragile state of Israeli democracy. Schejter shows how painfully complex the very distinction between a democracy and a non-democracy really is."--Daniel Dor, author of The Suppression of Guilt: The Israeli Media and the Reoccupation of the West Bank

"Based on meticulous and comprehensive research, this important work reassesses some of the tenets of traditional Zionist discourse and points critically to the roles that statism, cultural policies, and political economy have played in rendering the prevalent power imbalance in Israeli society."--Yaron Shemer, assistant professor of Israeli culture and modern Hebrew, University of North Carolina