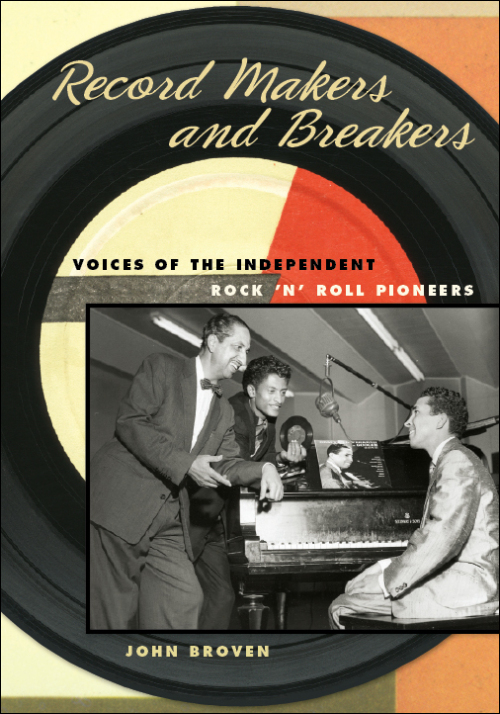 This volume is an engaging and exceptional history of the independent rock 'n' roll record industry from its raw regional beginnings in the 1940s with R & B and hillbilly music through its peak in the 1950s and decline in the 1960s. John Broven combines narrative history with extensive oral history material from numerous recording pioneers including Joe Bihari of Modern Records; Marshall Chess of Chess Records; Jerry Wexler, Ahmet Ertegun, and Miriam Bienstock of Atlantic Records; Sam Phillips of Sun Records; Art Rupe of Specialty Records; and many more.

John Broven is a respected expert on the rock 'n' roll era and has served as a consultant at Ace Records in the United Kingdom. A one-time coeditor of Blues Unlimited and cofounder of Juke Blues Magazine, he is the author of Rhythm and Blues in New Orleans and South to Louisiana: The Music of the Cajun Bayous. He lives on Long Island, New York.

"4 stars. Welcome to a world filled with payola, the mob and jukebox sounds."--MOJO

"Broven ... keeps the text moving right along, his fill-in facts and explanations welcome, his segues from interviewees' words to his own smooth and easy. The author clearly loves the music and holds the achievements of the record people in high regard, but he stays level-headed and avoids overpraising his heroes."--Downbeat

"The depth of factual details is incredible, but it's presented in the style of a rich oral history ... so as not to lose any of the flavour of their anecdotes. . . . It's a chronicle of the entrepreneurial American spirit, liberally punctuated by the creation of some of the most exciting and innovative music of all time."--Record Collector

"Covering the convoluted history of the recording industry from the 1940s to the 1960s, [Broven] combines in-depth archival research with fascinating anecdotes about chart-toppers, shady characters and label owners. . . . The impact of conniving entrepreneurs on the musicians and the layering of rich details and digressive detours as Broven traces the transition from R&B to rock make this equal to Roger D. Kinkle’s massive, four-volume Complete Encyclopedia of Popular Music and Jazz."--Publishers Weekly

"Broven has put together a detailed and engrossing study of the independent record labels of the 1940s-70s. . . . An outstanding and important study that goes well beyond comparable predecessors; highly recommended."--Library Journal (starred review)

"A fascinating new book about the early independent labels of rock 'n' roll underscores again the central role that radio played in turning rock 'n' roll into the musical language of modern American popular culture. Record Makers and Breakers ... is a rich and engaging history of those early years, largely told through the words of the smart guys, hustlers and Runyonesque characters who shaped them."--New York Daily News

"Broven is masterful, making Record Makers an essential book for anyone interested in not only American musical culture but American culture, period."--American Songwriter

"This is by far the most complete picture painted to date of the independent recording industry and it has the added advantage of illuminating many of the personalities who helped make that tick."--Blue Suede News

"An invaluable addition to understanding American music and indispensable for those into pop music history."--Jazz & Blues Report

"Record Makers and Breakers is a big train of a book that follows the rise of blues, R&B, soul and early rock 'n' roll through the lives behind the independent labels. Long though it is, the ride is rich for anyone curious about the business dynamics of popular culture."--New Orleans Magazine

"A treasure. John Broven has given the academic world a good dose of old-fashioned shoe leather journalism. This book will be invaluable to scholars studying the music industry and particularly the rock 'n' roll era."--Don Cusic, author of Johnny Cash: The Songs

"Record Makers and Breakers is replete with groundbreaking research that more than any other single book explains how the popular music industry worked. A must read about the record industry."--Robert Pruter, author of Doowop: The Chicago Scene and Chicago Soul

Awarded a Certificate of Merit by the Association for Recorded Sound Collections (ARSC) for Best Research in Recorded Rock and Popular Music, 2010