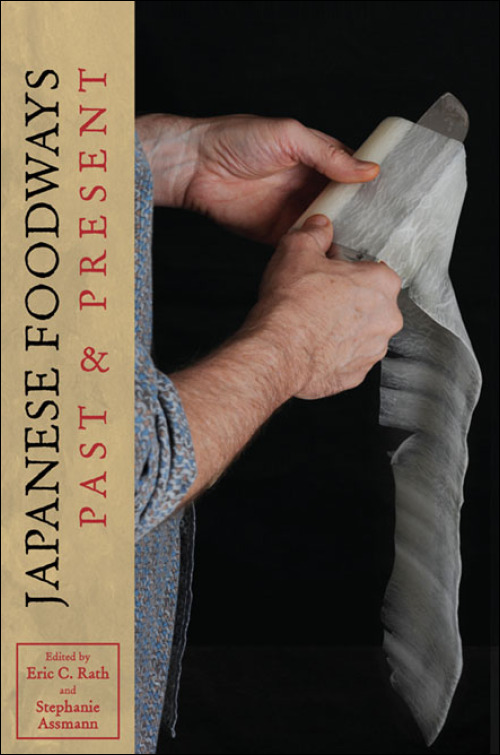 Japanese Foodways, Past and Present

Spanning nearly six hundred years of Japanese food culture, Japanese Foodways, Past and Present considers the production, consumption, and circulation of Japanese foods from the mid-fifteenth century to the present day in contexts that are political, economic, cultural, social, and religious. Diverse contributors--including anthropologists, historians, sociologists, a tea master, and a chef--address a range of issues such as medieval banquet cuisine, the tea ceremony, table manners, cookbooks in modern times, food during the U.S. occupation period, eating and dining out during wartimes, the role of heirloom vegetables in the revitalization of rural areas, children's lunches, and the gentrification of blue-collar foods.

Framed by two reoccurring themes--food in relation to place and food in relation to status--the collection considers the complicated relationships between the globalization of foodways and the integrity of national identity through eating habits. Focusing on the consumption of Western foods, heirloom foods, once-taboo foods, and contemporary Japanese cuisines, Japanese Foodways, Past and Present shows how Japanese concerns for and consumption of food have relevance and resonance with other foodways around the world.

Eric C. Rath is an associate professor of history at the University of Kansas and the author of The Ethos of Noh: Actors and Their Art. Stephanie Assmann is a lecturer at Tohoku University, Sendai, Japan, and the author of Value Change and Social Stratification in Japan: Aspects of Women's Consumer Behaviour.

"Provides an eye-opening view of the influence that other countries had on Japanese food culture, and how Japan was never an island unto itself."--Choice

"An excellent resource. . . . An exciting addition to a growing collection of English-language literature on the foodways of Japan."--Journal of Folklore Research

"Significantly advances our knowledge of the history of Japanese food."--Gastronomica

"A welcome addition to the growing body of scholarly literature on Japanese food and foodways."--Southeast Review of Asian Studies

"This volume makes an important contribution to a growing field of study."--Monumenta Nipponica

"A pathbreaking volume on Japanese culinary history with great depth and scope."--Merry Isaacs White, author of Perfectly Japanese: Making Families in an Era of Upheaval

"Required reading for anyone interested in Japanese history, food, and foodways. I couldn't put this book down!"--Samuel Hideo Yamashita, author of Leaves from an Autumn of Emergencies: Selections from the Wartime Diaries of Ordinary Japanese