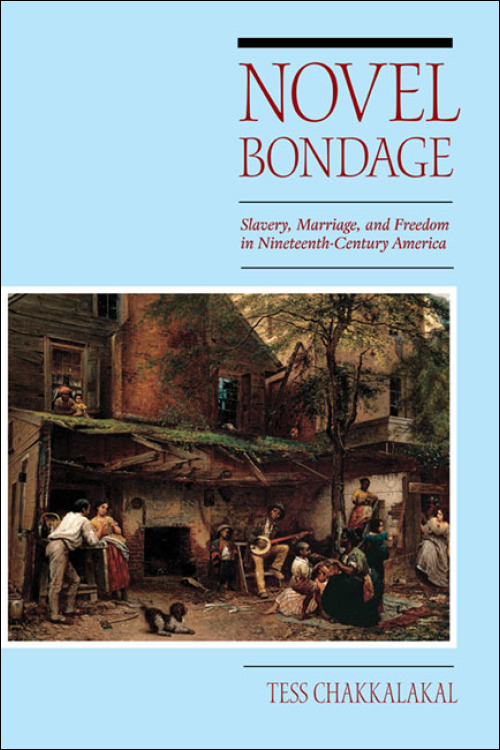 Filling a long-standing gap in our knowledge about slave-marriage, Novel Bondage unravels the interconnections between marriage, slavery, and freedom through renewed readings of canonical nineteenth-century novels and short stories by black and white authors. Tess Chakkalakal expertly mines antislavery and post–Civil War fiction to extract literary representations of slave-marriage, revealing how these texts and their public responses took aim not only at the horrors of slavery but also at the legal conventions of marriage.

Situating close readings of fiction alongside archival material concerning the actual marriages of authors such as Lydia Maria Child, Harriet Beecher Stowe, William Wells Brown, and Frank J. Webb, Chakkalakal examines how these early novels established literary conventions for describing the domestic lives of American slaves in describing their aspirations for personal and civic freedom. Exploring this theme in post–Civil War works by Frances E. W. Harper and Charles Chesnutt, she further reveals how the slave-marriage plot served as a fictional model for reforming marriage laws.

As nonlegal unions, slave-marriages departed in crucial ways from the prevailing definition of marriage, and Chakkalakal reveals how these highly unconventional unions constituted an aesthetic and affective bond that challenged the legal definition of marriage in nineteenth-century America. Novel Bondage invites readers to rethink the "marital work" of nineteenth-century fiction and the historical role it played in shaping our understanding of the literary and political meaning of marriage, then and now.

Tess Chakkalakal is an associate professor of Africana studies and English at Bowdoin College.

"A must read. Highly recommended."--Choice

"Chakkalakal's book provides a new perspective on the central figures within the black family and the ways in which that aspect of family helps create meaning within the community and identify in the individual. . . . it is an informative and thoughtful text"--The Western Journal of Black Studies

"A sophisticated and nuanced analysis of the (largely) fictionalized slave marriages that will hold some value for historians who wish to gain greater insight into the institution. Novel Bondage rewards the close readers, prompting us to think about what marriage represented or symbolized in the 19th century, and how it has evolved as an institution."--The Journal of African American History

"Tess Chakkalakal advances important scholarship on African American marriage during and immediately following the slave era. Her readings of canonical authors are provocative and controversial, but grounded well enough to enliven conversations about these writers and their times."--Frances Smith Foster, author of 'Til Death or Distance Do Us Part: Love and Marriage in African America

"Exploring the paradox represented by slave marriage in nineteenth-century American fiction, Novel Bondage deftly revises our reading of canonical works, offering a clearer understanding of these texts as direct participants in critiquing marriage as a legal institution."--Kenneth W. Warren, author of What Was African American Literature?

Selected as one of two winners of the Robert K. Martin Prize for Best Book, sponsored by the Canadian Association for American Studies (CAAS), 2012.