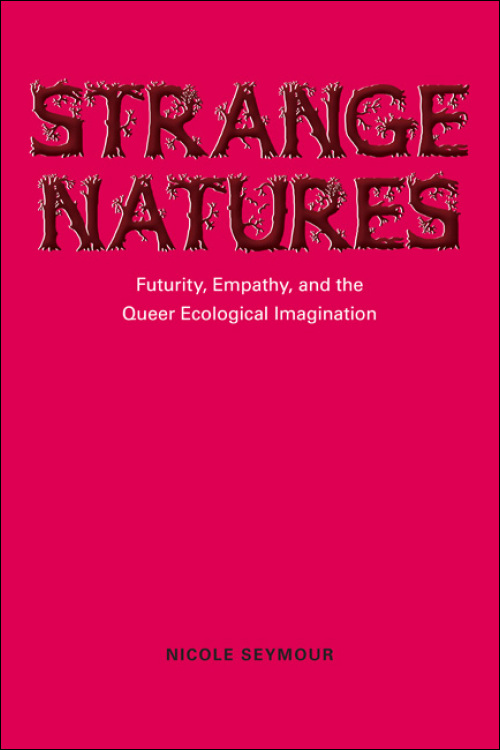 Strange Natures reveals a tradition of queer environmentalism in contemporary literature and film from the Americas. In the process, it challenges the historical disconnect between queer theory and ecocriticism--a disconnect that, as Nicole Seymour shows, emerges from those disciplines' divergent attitudes toward "nature."

Nicole Seymour investigates the ways in which contemporary queer fictions offer insight on environmental issues through their performance of a specifically queer understanding of nature, the nonhuman, and environmental degradation. By drawing upon queer theory and ecocriticism, Seymour examines how contemporary queer fictions extend their critique of "natural" categories of gender and sexuality to the nonhuman natural world, thus constructing a queer environmentalism. Seymour's thoughtful analyses of works such as Leslie Feinberg's Stone Butch Blues, Todd Haynes's Safe, and Ang Lee's Brokeback Mountain illustrate how homophobia, classism, racism, sexism, and xenophobia inform dominant views of the environment and help to justify its exploitation. Calling for a queer environmental ethics, she delineates the discourses that have worked to prevent such an ethics and argues for a concept of queerness that is attuned to environmentalism's urgent futurity, and an environmentalism that is attuned to queer sensibilities.

Nicole Seymour is an assistant professor of English at California State University, Fullerton.

"A groundbreaking book, one that carefully traces the barriers to such work (namely, queer theory's vexed relationship to 'nature' and the two fields' ostensibly conflicting relationships to the status of futurity) in order to develop a queer ecocritical practice that engages, rather than resists, such difficulty. . . . Seymour's text limns the contours of the possible, demonstrating how a queer ecological politics intersects with, emerges from, and necessitates engagement with other pressing projects of our time."--American Studies

"Using queer theory's feisty skepticism to fashion a queer ecological interpretation of a range of texts that might not seem 'environmental,' Strange Natures introduces a rich and complex dialogue that shows enormous potential for scholars in queer studies, cinema studies, social justice, and the environment."--Katie Hogan, author of Women Take Care: Gender, Race, and the Culture of AIDS

• ASLE Ecocriticism Book Award, Association for the Study of Literature and Environment, 2015