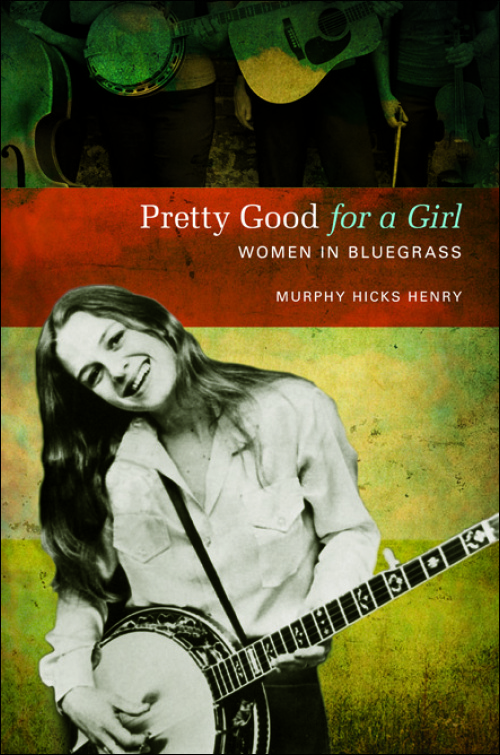 Pretty Good for a Girl

The first book devoted entirely to women in bluegrass, Pretty Good for a Girl documents the lives of more than seventy women whose vibrant contributions to the development of bluegrass have been, for the most part, overlooked. Accessibly written and organized by decade, the book begins with Sally Ann Forrester, who played accordion and sang with Bill Monroe's Blue Grass Boys from 1943 to 1946, and continues into the present with artists such as Alison Krauss, Rhonda Vincent, and the Dixie Chicks. Drawing from extensive interviews, well-known banjoist Murphy Hicks Henry gives voice to women performers and innovators throughout bluegrass's history, including such pioneers as Bessie Lee Mauldin, Wilma Lee Cooper, and Roni and Donna Stoneman; family bands including the Lewises, Whites, and McLains; and later pathbreaking performers such as the Buffalo Gals and other all-girl bands, Laurie Lewis, Lynn Morris, Missy Raines, and many others.

Murphy Hicks Henry is a professional banjo player, teacher, and writer living in Virginia. She founded the Women in Bluegrass newsletter and has written regularly for Bluegrass Unlimited and Banjo Newsletter. She is also the co-creator of The Murphy Method, a series of instructional videos on playing the banjo and other bluegrass instruments.

"The humor and passion within Pretty Good for a Girl is evident. . . . [the] purpose is not only to show historical documentation of how bluegrass is not, in fact, a man's music; it's also to give young and current female musicians the determination and stories of women who have all bucked cultural resistance to follow their passions."--Boxx Magazine

"This impressive history of women in bluegrass clearly indicates women have been a big part of bluegrass since its earliest days, even when they were ignored by the media and fellow musicians. A much-needed addition to the bluegrass canon."--Booklist

"A book that's been so needed, on a topic so neglected for so long."--Roots Watch

"One of the most important bluegrass books that will be published this decade."--Bluegrass Today

"Henry guides the reader through an historical progression decade by decade, providing a detailed biography for a variety of well-known, lesser-known and obscure females who have devoted some of their lives to bluegrass music. Very highly recommended."--Bluegrass Europe

"This academically solid and emotionally moving work shows the price that was paid by so many women in creating not only their own place in bluegrass, but in shaping and taking the music to new venues and wider audiences. This work should be a highlight on any list of required books for many years to come, and should be read by everyone in bluegrass--women and men."--Bluegrass Unlimited

"A massive, well-researched work that students of music and women's studies will find useful."--Library Journal

"Pretty Good for a Girl breaks new ground as a cultural history of women in bluegrass music. Henry also makes an important contribution to women's studies with her analysis of how women made their own way into what has historically been considered a male-dominated genre. Thanks to Henry, scholars can no longer talk about Bill Monroe and Earl Scruggs without mentioning the women who also shaped the genre of bluegrass."--West Virginia History

"Henry brings a plethora of biographical facts, band and performance histories, discographical data, and personal reflections together between two convenient and fairly-priced covers. As a beginning sourcebook and reference tool it has no peer."--Notes

"The musical biographies in this book advance the study of bluegrass music. In addition, through her methods of interviewing and chapter organization, Henry makes a gender an important dimension of bluegrass history. The book plainly displays the role gender has played in bluegrass culture, and how bluegrass people have viewed their music and themselves."--Journal of Folklore Research

"This terrific book adds significantly to our knowledge of bluegrass music. Part reference and part impassioned argument, Pretty Good for a Girl is filled with extremely interesting narratives and has the firepower to become a great inspiration for a new generation of young women musicians."--Ellen Wright, coauthor (with Roni Stoneman) of Pressing On: The Roni Stoneman Story

"A fascinating history of bluegrass music from a female musician's perspective. Wonderfully readable, brisk in its sweeping chronology of a huge topic, and filled with anecdotal gems that bring history to life, this is an enthralling and important book."--Thomas A. Adler, author of Bean Blossom: The Brown County Jamboree and Bill Monroe's Bluegrass Festivals