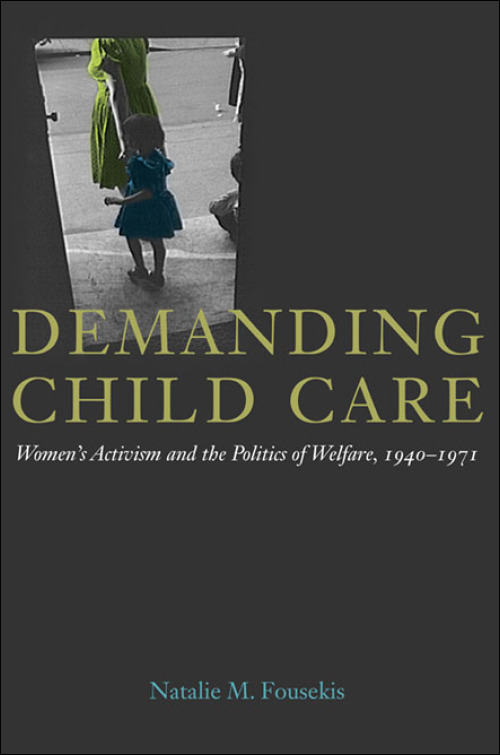 During World War II, as women stepped in to fill jobs vacated by men moving into the armed services, the federal government established public child care centers in local communities for the first time. When the government announced plans to withdraw funding and terminate its child care services at the end of the war, women in California protested and lobbied to keep their centers open, even as these programs rapidly vanished in other states.

Analyzing the informal networks of cross-class and cross-race reformers, policymakers, and educators, Demanding Child Care: Women's Activism and the Politics of Welfare, 1940–1971 traces the rapidly changing alliances among these groups. During the early stages of the childcare movement, feminists, Communists, and labor activists banded together, only to have these alliances dissolve by the 1950s as the movement welcomed new leadership composed of working-class mothers and early childhood educators. In the 1960s, when federal policymakers earmarked child care funds for children of women on welfare and children described as culturally deprived, it expanded child care services available to these groups but eventually eliminated public child care for the working poor.

Deftly exploring the possibilities for partnership and the limitations among these key parties as well as the structural forces impeding government support for broadly distributed child care, Fousekis helps to explain the barriers to a publicly funded comprehensive child care program in the United States.

* Publication supported by a grant from California State University, Fullerton.

Natalie M. Fousekis is an associate professor of history and the director of the Center for Oral and Public History at California State University, Fullerton.

"Fousekis unearths an important skirmish in another of America's yet-to-be won battles. . . . [She] reminds us of the far-reaching consequences of a withered labor movement and the absence of a broad-based coalition fighting for child care."--Women's Review of Books

"A lively story of an enlightened service to working women . . . . a contribution to the history of child care; the history of American women."--American Historical Review

"A gripping tale of California politics, working women's activism, and the welfare state. Fousekis introduces readers to a remarkable cast of characters: ordinary women who recognized that to support their families they needed the peace of mind that quality child care could provide; visionary educators and teachers who understood child care as part of public education, and not social assistance; and male allies in the legislature and public service who were instrumental in policymaking."--Eileen Boris, coeditor of The Practice of U.S. Women's History: Narratives, Dialogues, and Intersections

"A delightful book of interest to students and scholars of the welfare state, second-wave feminism, social reformers, the history of education, and the anti-Communist movement. Fousekis does an exemplary job of integrating women's personal stories into the childcare movement."--Robyn Muncy, author of Creating a Female Dominion in American Reform, 1890–1935