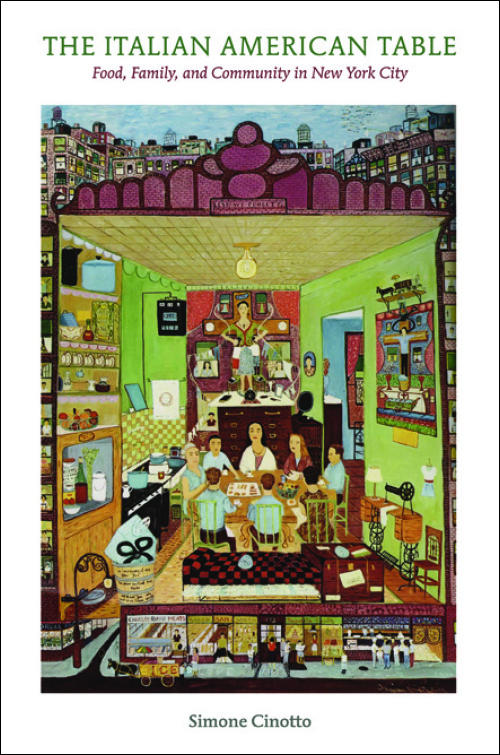 Looking at the historic Italian American community of East Harlem in the 1920s and 1930s, Simone Cinotto recreates the bustling world of Italian life in New York City and demonstrates how food was at the center of the lives of immigrants and their children. From generational conflicts resolved around the family table to a vibrant food-based economy of ethnic producers, importers, and restaurateurs, food was essential to the creation of an Italian American identity. Italian American foods offered not only sustenance but also powerful narratives of community and difference, tradition and innovation as immigrants made their way through a city divided by class conflict, ethnic hostility, and racialized inequalities.

Drawing on a vast array of resources including fascinating, rarely explored primary documents and fresh approaches in the study of consumer culture, Cinotto argues that Italian immigrants created a distinctive culture of food as a symbolic response to the needs of immigrant life, from the struggle for personal and group identity to the pursuit of social and economic power. For generations of Neapolitan, Sicilian, and Calabrese immigrants in New York, Italian American cuisine was much more than a remnant of the home country; Cinotto shows, in vibrant detail, how the Italian American table we now celebrate emerged as the outcome of years of selective incorporations of cultural fragments, resources, and meanings available to the immigrant community. Adding a transnational dimension to the study of Italian American foodways, Cinotto recasts Italian American food culture as an American "invention" resonant with traces of tradition and shows how generations of creative, ambitious improvisers in tenement kitchens and behind restaurant stoves cooked, ate, and shared the foods that helped them make their way into American culture.

Simone Cinotto teaches history at the University of Gastronomic Sciences, Pollenzo, Italy, where he is the director of the Master's Program in Food Culture and Communications: Food, Place, and Identity. He is the author of Soft Soil, Black Grapes: The Birth of Italian Winemaking in California.

"Insightful, pathbreaking research. . . . a new perspective on the linkage between food and family. Recommended."--Choice

"Written with passion and clarity, The Italian American Table represents a stunning achievement. While tackling an irresistible topic--the meaning of food in the lives of Italian immigrants and their children--Simone Cinotto has managed to write a book that should please a wide range of interdisciplinary scholars and readers."--The Journal of American History

"Interesting insight on the culinary history of the Italian diaspora. The book introduces wider reflections on the role of food production, preparation, and consumption in immigrant communities, a theme that is as urgent today as it was in the past century."--Gastronomica

"In recent years, food studies have become a growing area of interdisciplinary scholarship. . . . Simone Cinott's book, The Italian American Table: Food, Family, and Community in New York City, makes a significant contribution to this body of scholarship. . . . A rich and important edition. This admirable piece of scholarship transcends disciplinary boundaries and should interest scholars and students of history, ethnic studies, food studies, gender and urban studies, as well as those of business and marketing. It will join the ranks of the classic studies of Italian American History."--Journal of American Ethnic History

"In clear, bright prose Cinotto focuses on the period spanning from 1920 to 1940, and thus extends beyond the years of intense Italian immigration to include generational change and later cultural reproduction. . . . The book appropriately cleaves between Italian American immigrant's food culture and later attempts at selling 'Italian' food to white Americans. . . . Food is part of a larger cultural economy here, and Cinotto sheds some light on its production as a symbol and commodity over several generations."--American Historical Review

"Full of rich analysis and insights, this first book-length scholarly study of Italian immigrant foodways in the United States offers an explanation for why and how food became so closely attached to the creation of Italian American ethnic identities. A convincing and significant contribution."--Donna Gabaccia, author of We Are What We Eat: Ethnic Food and the Making of Americans

"With rich descriptive detail that is fascinating and engagingly presented, The Italian American Table advances our understanding not only of Italians' migration experiences but of immigrants in general. Simone Cinotto uncovers a treasure trove of data from various historical sources and weaves it together into a clear and compelling narrative."--Carole M. Counihan, author of Around the Tuscan Table: Food, Family, and Gender in Twentieth-Century Florence

Visit the Simone Cinotto's Facebook page for the book.