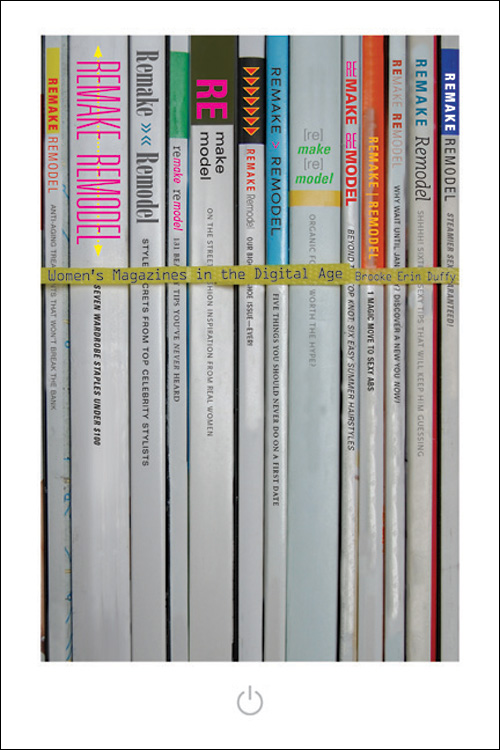 What is a magazine? For decades, women's magazines were regularly published, print-bound guidebooks aimed at neatly defined segments of the female audience. Crisp pages, a well-composed visual aesthetic, an intimate tone, and a distinctive editorial voice were among the hallmarks of women's glossies up through the start of the twenty-first century. Yet in an era of convergent media technologies, participatory culture, and new economic demands, producers are confronting vexing questions about the identity of women's magazines.

Remake, Remodel: Women's Magazines in the Digital Age offers a unique glimpse inside the industry and reveals how executives and content creators are working tirelessly to remake their processes and products. Through in-depth interviews with women's magazine producers, an examination of hundreds of trade press reports, and in-person observations at industry summits, Brooke Erin Duffy chronicles a fascinating transformation in print culture and technology from the magazine as object to the magazine as brand. She draws on these findings to contribute to critical debates about media professionals' labor conditions, workplace cultures and hierarchies, and creative processes.

Brooke Erin Duffy is an assistant professor in the School of Media and Communication at Temple University and the coeditor of Key Readings in Media Today: Mass Communication in Contexts.

"A remarkable case study of an industry in flux, Duffy's well-researched book would be an asset to any course on magazine media in general and on women's magazines in particular."--Journalism & Mass Communication Quarterly

"Remake, Remodel offers a compelling look at the ways in which a shifting media landscape is provoking structural changes in labor organization, content development, and professional identity within the women's magazine industry."--Journal of American Culture

"Remake, Remodel is not intended as a harsh attack on new media's participatory culture, but it aims (and succeeds) in presenting "a more nuanced view" of the magazine industry. . . . An excellent resource for both scholars and teachers."--Journal of Magazine & New Media Research

"A cutting-edge study at the forefront of new conceptualizations and practices in the magazine industry. Duffy insightfully charts the dilemmas and complexities the magazine faces as it strives to define itself in the face of changes in technology and political economy in media and advertising."--Matthew P. McAllister, coeditor of The Routledge Companion to Advertising and Promotional Culture

"Brooke Erin Duffy offers a timely, well-researched account of recent shifts in the women's magazine industry and the impact of these changes on publishers and consumers. Her book offers an engaging analysis of the ways in which magazine producers have been compelled to engage with new media platforms in the quest to maintain profitability."--Anna Gough-Yates, author of Understanding Women's Magazines: Publishing, Markets, and Readerships in Late-Twentieth Century Britain