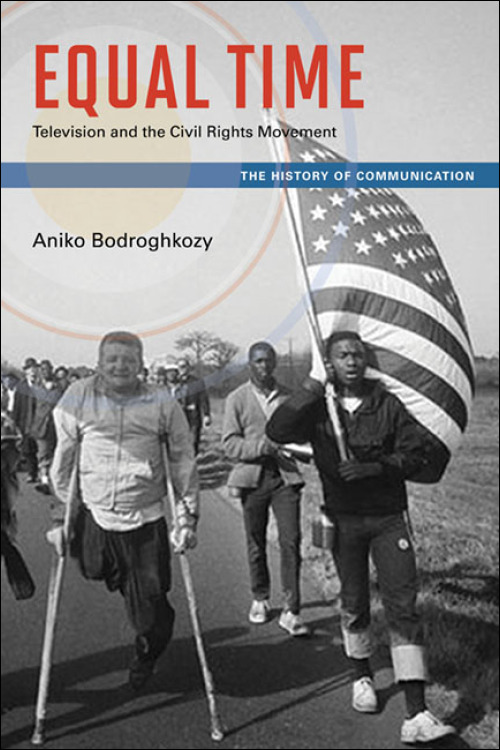 Aniko Bodroghkozy brings to the foreground network news treatment of now-famous civil rights events including the 1965 Selma voting rights campaign, integration riots at the University of Mississippi, and the March on Washington, including Martin Luther King's "I Have a Dream" speech. She also examines the most high-profile and controversial television series of the era to feature African American actors--East Side/West Side, Julia, and Good Times--to reveal how entertainment programmers sought to represent a rapidly shifting consensus on what "blackness" and "whiteness" meant and how they now fit together.

Aniko Bodroghkozy is an associate professor of media studies at the University of Virginia and the author of Groove Tube: Sixties Television and the Youth Rebellion.

"Equal Time goes beyond news coverage and explores the portrayal of black and white characters in television dramas and comedies. . . . A readable and enjoyable book."--The Ottawa Citizen

"Thoughtful, provocative, and well-researched. . . . This is an important book."--Journalism History

"Acute insight into the complex interaction between social change and television programming during the 1960s."--American Journalism

"A valuable addition to the maturing scholarship on connections between the African American freedom struggle and the media. A compelling and thoughtful book of equal interest to students of the media and the freedom struggle."--The Journal of Southern History

"Bodroghkozy's well-written, smart, and nuanced analysis makes us think about the relationship between the media and the civil rights movement in fresh and interesting ways."--Susan J. Douglas, author of The Rise of Enlightened Sexism: How Pop Culture Took Us from Girl Power to Girls Gone Wild

"A thoroughly researched analysis of the intersection between race, social change, and network television in the 1960s. Bodroghkozy shows in vivid detail how television served as a powerful tool of moral persuasion that played a key role in turning the tide toward the passage of historic civil rights legislation."--S. Craig Watkins, author of The Young and the Digital: What the Migration to Social Network Sites, Games, and Anytime, Anywhere Media Means for Our Future