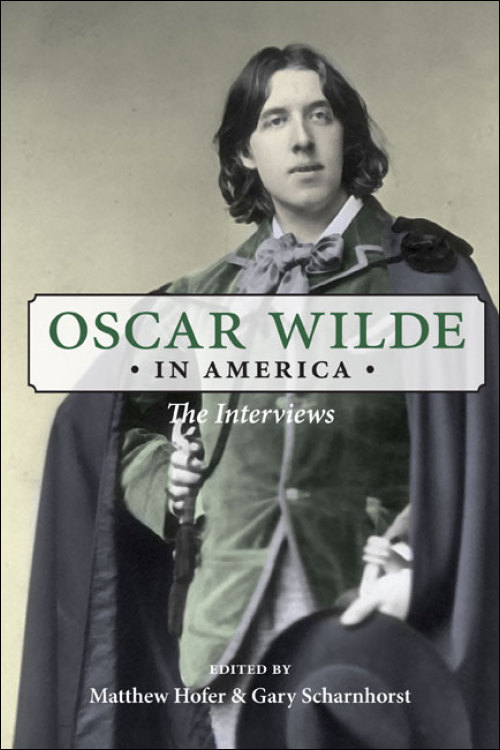 This comprehensive and authoritative collection of Oscar Wilde's American interviews affords readers a fresh look at the making of a literary legend. Better known in 1882 as a cultural icon than a serious writer (at twenty-six years old, he had by then published just one volume of poems), Wilde was brought to North America for a major lecture tour on Aestheticism and the decorative arts that was organized to publicize a touring opera, Gilbert and Sullivan's Patience, which lampooned him and satirized the Aesthetic "movement" he had been imported to represent.

In this year-long series of broadly distributed and eagerly read newspaper interviews, Wilde excelled as a master of self-promotion. With characteristic aplomb, he adopted the role as the ambassador of Aestheticism, and reporters noted that he was dressed for the part. He wooed and flattered his hosts everywhere, and he tried out a number of phrases, ideas, and strategies that ultimately made him famous as a novelist and playwright. This exceptional volume cites all ninety-one of Wilde's interviews and contains transcripts of forty-eight of them, and it also includes his lecture on his travels in America.

"A generous and welcome sampling."--New York Review of Books

"Wilde was a source of fascination and provocation, and these assembled portraits reveal the rawness and the refinements, the pride and the anxieties, of American culture in the making during this important period. A vital and valuable book."--Eric Haralson, editor of Reading the Middle Generation Anew: Culture, Community, and Form in Twentieth-Century American Poetry

"This stimulating work is an invaluable record of Wilde's speech, appearance, and demeanor. An excitingly fresh study of interest both to Wilde specialists and to general readers."--Donald Mead, chairman of the Oscar Wilde Society and editor of The Wildean: A Journal of Oscar Wilde Studies