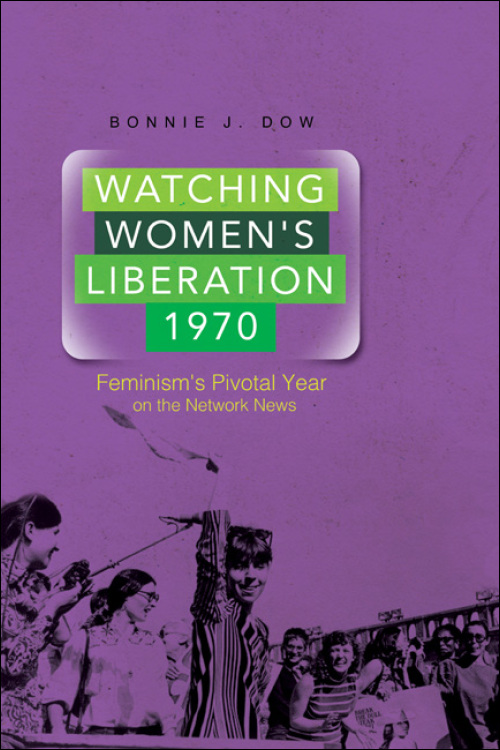 In 1970, ABC, CBS, and NBC--the “Big Three” of the pre-cable television era--discovered the feminist movement. From the famed sit-in at Ladies’ Home Journal to multi-part feature stories on the movement's ideas and leaders, nightly news broadcasts covered feminism more than in any year before or since, bringing women's liberation into American homes.

In Watching Women's Liberation, 1970: Feminism's Pivotal Year on the Network News, Bonnie J. Dow uses case studies of key media events to delve into the ways national TV news mediated the emergence of feminism's second wave. First legitimized as a big story by print media, the feminist movement gained broadcast attention as the networks’ eagerness to get in on the action was accompanied by feminists’ efforts to use national media for their own purposes. Dow chronicles the conditions that precipitated feminism's new visibility and analyzes the verbal and visual strategies of broadcast news discourses that tried to make sense of the movement.

Groundbreaking and packed with detail, Watching Women's Liberation, 1970 shows how feminism went mainstream--and what it gained and lost on the way.

"Combines the fields of media and feminist studies to expose how truly remarkable 1970 was. What Dow contributes to this field is insight into a movement when this treatment began, and what she reveals is the continued relevancy of her claim."--H-Net Reviews

"With Watching Women's Liberation 1970, Dow provides a thorough and accessible introduction to second-wave feminism. Introductory gender studies courses, as well as women's history and journalism history courses, would benefit from the inclusion of this book."--Journalism History

"White the scholarship, writing and rhetorical analysis excellent, what is particularly valuable about this book is the ways that Dow not only provides nuanced analysis of coverage itself, but provides highly original and pertinent historical information which contextualized coverage. This book will be useful for those studying women's history, feminism, media and cultural studies, and may also be of interest to the general public who are interested in the media's relationship with feminists and feminist activism."--Canadian Journal of History

"In her well-researched examination of network news, Dow argues against the view that television's treatment of feminism was universally negative. . . . [A] valuable contribution to our understanding of the complex process by which this movement developed."--Women's Review of Books

"Dow's careful and astute reading of the mediated meanings of the second wave attests to the rhetorical power of broadcast media in shaping public perceptions of women's liberation."--Women and Social Movements in the United States, 1600-2000

"An important and incisive study of media reportage in 1970, a 'pivotal year' for feminist movements. Highly recommended."--Choice

"Dow's brilliant book should appeal to scholars and general readers who are interested in journalism, feminist politics, and popular memory."--The Journal of American History

"Dow is particularly skilled at drawing together theory, historical context, primary media content, and examples of other scholarly work on the news media and the women's movement in accessible ways, and that is the great strength of this collection of essays."--Labour/Le Travail

"As with her previous work, Dow's critical rhetorical analysis is sound and incisive, and her archival research is very impressive. This is an important study for media studies and feminist media studies, and I anticipate it will have a wide impact."--Sarah Banet-Weiser, author of Authentic™: The Politics of Ambivalence in a Brand Culture