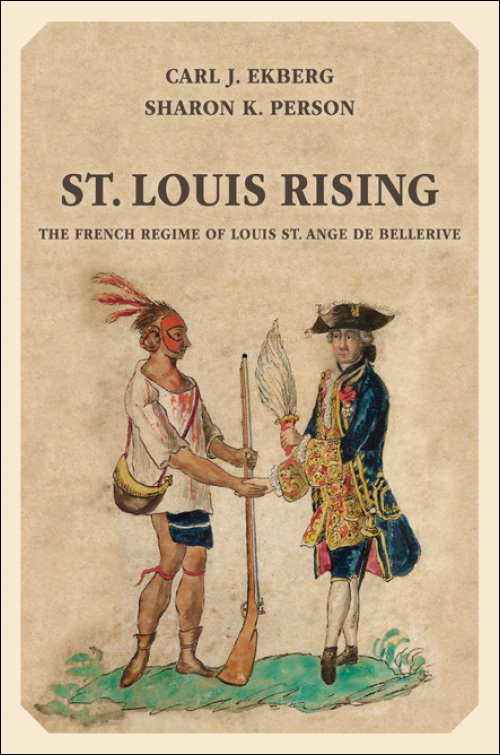 In most tellings, the story of St. Louis's early days features the fur traders Pierre Laclède and Auguste Chouteau hacking a city out of wilderness with irresistible élan.

St. Louis Rising overturns such gauzy myths with the contrarian thesis that French government officials and institutions shaped and structured early village society. Of the former, none did more than Louis St. Ange de Bellerive. As Carl J. Ekberg and Sharon K. Person show, St. Ange's commitment to the Bourbon monarchy and to civil tranquility made him the prime mover as St. Louis emerged during the tumult that followed the French and Indian War.

Drawing on a wealth of new source materials, Ekberg and Person reexamine the complexities of politics, Indian affairs, marriage customs, slavery, the role of women, and material culture that characterized the 1760s. Their alternative version of the oft-told tale of St. Louis's founding places the event within the context of Illinois Country society. Vividly depicting life in a colonial outpost, St. Louis Rising provides a trove of new information on everything from the fur trade to the arrival of the British and Spanish in the aftermath of the Seven Years' War--and explodes the many histories that rely on Chouteau's self-aggrandizing recollections.

Carl Ekberg is a professor emeritus of history at Illinois State University. His many books include A French Aristocrat in the American West: The Shattered Dreams of Delassus de Luzières and Stealing Indian Women: Native Slavery in the Illinois Country, and he is a two-time winner of the Kemper and Leila Williams Prize. Sharon Person is a professor of English specializing in English as a Second Language at St. Louis Community College, St. Louis Missouri.

"The authors depict the lives of common citizens in exceptional detail. The reader is wonderfully exposed to the sights and sounds, the small triumphs and trying tribulations of daily life. Rather than looking at history from the top down of a few government officials, this contrarian history looks at the lives of ordinary people and how they responded to their government. This is a fresh and stimulating book."--The Missourian

"For students of historiography, this is a classic scholarly 'who done it.' Through incredibly thorough archival research, Ekberg and Person are able to paint a more accurate picture of the actions of prominent officials in the settlement of St. Louis. Highly recommended."--Choice

"Scholars and general readers alike will appreciate the careful scholarship that underpins this study, with historians likely to return to it repeatedly to mine its notes and appendices. Above all, this book places the first decade of St. Louis's history firmly within the larger context of Illinois Country developments and resurrects St. Ange as a key actor in the village's earliest years."--Missouri Historical Review

"A noteworthy contribution to Illinois history. . . . For historians of what became the state of Illinois, the book reminds readers that the people of frontier Illinois lived within the orbit of St. Louis."--Journal of the Illinois State Historical Society

"Person and Ekberg have given us another gift. It is high time we incorporated this history into our general narratives and comparative studies." --Western Historical Quarterly

"St. Louis Rising combines exhaustive research in French-language sources with a detailed understanding of colonial society in the Illinois Country to challenge received wisdom and misconceptions about the region. . . . A skilled examination of the everyday life of French colonists in early St. Louis."--Journal of Southern History

"Masterfully well researched! This is not just a story about frontier legends like Laclède. It's a story about an imperial structure, of which St. Ange and his family were the most important representatives. The authors do a great job of including the larger imperial story--legal codes, notaries, trade rules and regulations, and officials like St. Ange and Labuxière--in the founding story. There is nuance and detail here that will impress any historian."--Robert Morrissey, author of Bottomlands, Borderlands: Empires and Identities in the 18th Century Illinois Country

"In illuminating the neglected career of Louis St. Ange de Bellerive, Carl J. Ekberg and Sharon K. Person have corrected origin stories of St. Louis that usually focus only on Auguste Chouteau and his surrogate father, Pierre Laclède. Digging deeper, Ekberg and Person have mined new archival sources to excavate the social, cultural, and economic development of the Illinois Country in the eighteenth century. This book is a great present to the city on its 250th birthday, and is a signal contribution to the colonial history of the Mississippi River valley."--Stephen Aron, author of American Confluence: The Missouri Frontier from Borderland to Border State

"Louis St. Ange de Bellerive's compelling story, told here for the first time, reveals the extent of his service to France with a career that took him from Fort Orleans, to Vincennes, and finally to St. Louis, where he was . . . in command. Some of the authors' conclusions are sure to discomfort traditionalists, but their factually grounded arguments will prove difficult to refute."--William E. Foley, author of Wilderness Journey: The Life of William Clark and coauthor of The First Chouteaus: River Barons of Early St. Louis