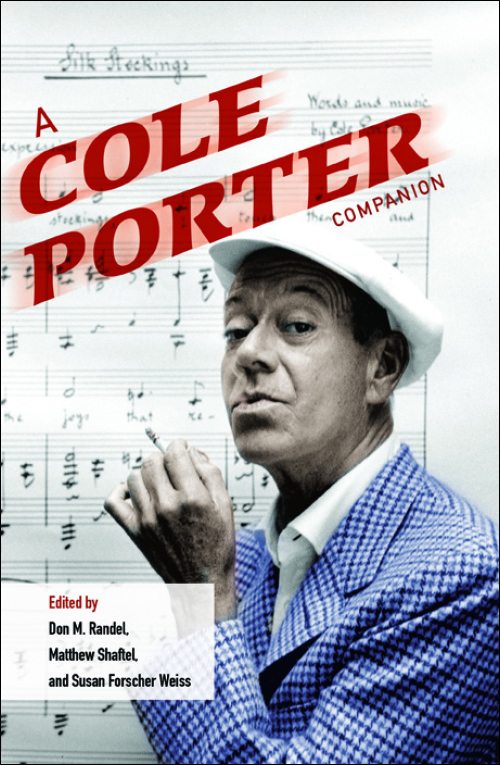 Balancing sophisticated melodies and irresistible rhythms with lyrics by turns cynical and passionate, Cole Porter sent American song soaring on gossamer wings. Timeless works like "I Get a Kick Out of You" and "At Long Last Love" made him an essential figure in the soundtrack of a century and earned him adoration from generations of music lovers.

In A Cole Porter Companion, a parade of performers and scholars offers essays on little-known aspects of the master tunesmith's life and art. Here are Porter's days as a Yale wunderkind and his nights as the exemplar of louche living; the triumph of Kiss Me Kate and shocking failure of You Never Know; and his spinning rhythmic genius and a turkey dinner into "You're the Top" while cultural and economic forces take "Ev'ry Time We Say Goodbye" in unforeseen directions. Other entries explore notes on ongoing Porter scholarship and delve into his formative works, performing career, and long-overlooked contributions to media as varied as film and ballet.

Prepared with the cooperation of the Porter archives, A Cole Porter Companion is an invaluable guide for the fans and scholars of this beloved American genius.

* Publication of this book was supported by grants from the H. Earle Johnson Fund of the Society for American Music and from the Donna Cardamone Jackson Endowment of the American Musicological Society, funded in part by the National Endowment for the Humanities and the Andrew W. Mellon Foundation.

Don M. Randel is the author of The Harvard Dictionary of Music and Musicians and former president of the University of Chicago. Matthew Shaftel is the Dean of Westminster College of the Arts at Rider University and coauthor of Aural Skills in Context: A Comprehensive Approach to Sight Singing, Ear Training, Keyboard Harmony, and Improvisation. Susan Forscher Weiss is Professor of Musicology and German & Romance Languages and Literature at The Johns Hopkins University and editor of Music Education in the Middle Ages and the Renaissance.

"Is there a need for a book like this, a compendium of essays by scholars and experts in musicology, music history and sundry ancillary specialties? The answer is an emphatic yes. . . . .To return to Irving Berlin, 'ya don’t need any larning' to appreciate this most sophisticated and well educated of American songwriters, but the huge amount of detail and analysis packed into this book enhances that appreciation."--The Washington Times

"A Cole Porter Companion is an important addition to scholarship on American musical theatre and popular music. . . . This is a good introduction to scholarly examinations of the work of one of the most beloved American composers."--Indiana Magazine if History

"Though centered on one person and his undeniable talents, the compilation explores many different avenues and subtopics, keeping the subject fresh and enjoyable throughout."--Notes

"As part of the 'Music in American Life' series, this book is an essential introduction and study of the music of one of the greatest American composers of the twentieth century." --The Journal of American Culture

"A Cole Porter Companion is simply an indispensable, unadulterated joy of a book--required reading for anyone who loves music, lyrics, the theater, and of course the inimitable Cole Porter--from the non-music-reading fan to the most sophisticated and scholarly musicologist. A landmark volume, bridging the gap between academe and the general listener with a bubbly élan worthy of the master himself."--Maury Yeston

"Anything goes?--not in the ruthless world of Tin Pan Alley. Of all the great American Songbook composers, Cole Porter is perhaps the hardest to fit into Broadway's 'Golden Age.' This fine guide suggests how best to do it."--Tim Carter, author of Oklahoma! The Making of an American Musical