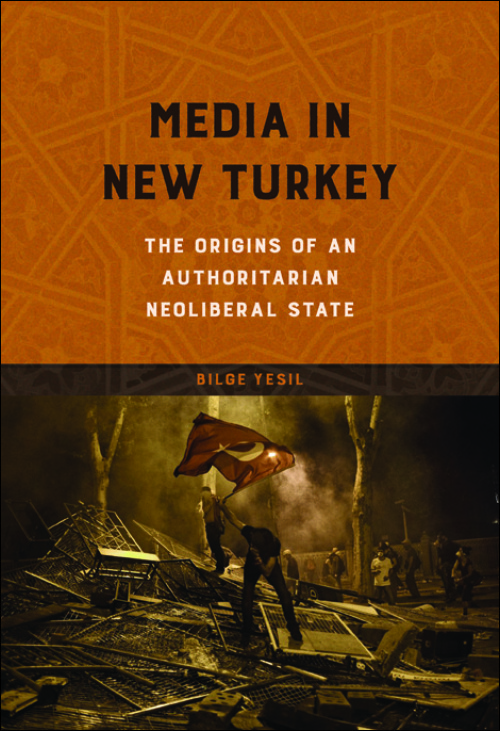 Investment and expansion have made Turkish media a transnational powerhouse in the Middle East and Central Asia. Yet tensions continue to grow between media outlets and the Islamist AKP party that has governed the country for over a decade.

In Media in New Turkey, Bilge Yesil unlocks the complexities surrounding and penetrating today's Turkish media. Yesil focuses on a convergence of global and domestic forces that range from the 1980 military coup to globalization's inroads and the recent resurgence of political Islam. Her analysis foregrounds how these and other forces become intertwined, and she uses Turkey's media to unpack the ever-more-complex relationships.Yesil confronts essential questions regarding: the role of the state and military in building the structures that shaped Turkey's media system; media adaptations to ever-shifting contours of political and economic power; how the far-flung economic interests of media conglomerates leave them vulnerable to state pressure; and the ways Turkey's politicized judiciary criminalizes certain speech.

Drawing on local knowledge and a wealth of Turkish sources, Yesil provides an engrossing look at the fault lines carved by authoritarianism, tradition, neoliberal reform, and globalization within Turkey's increasingly far-reaching media.

Bilge Yesil is an associate professor of media culture at City University of New York, College of Staten Island. She is the author of Video Surveillance: Power and Privacy in Everyday Life.

"A very timely and enlightening book. . . . Yesil uses considerable informal interview content as well as reference to abundant published sources to provide an excellent review of the processes that have undermined the rule of law in Turkey, whether through state terrorism or political-economic collusion and corruption. . . . Highly recommended."--Choice

"From a historical point of view, the book successfully underlines the centralized authoritarian character of the state. . . . It serves as an essential guide for scholars and students investigating recent concerns and/or the rooted tensions in the media-politics-culture triangle."--International Journal of Communication

"Bilge Yesil's book is a fantastic introduction for those wanting to develop an understanding of the complex relationship between politics, economics, and the media in contemporary Turkey." --H-Net Reviews

"The rise of the Justice and Development Party (AKP) in Turkey since the early 2000s and its overseeing of a growing economy and a forceful foreign policy have been one of the key forces shaping the Middle East in a turbulent decade bookended by the September 11 attacks and the Arab Uprisings. In Media in New Turkey, Yesil explores and explains the growth of Turkish media, its travails with the government, and its forays in the Middle East and Central Asia. Deftly eschewing media determinism, Yesil approaches Turkish media as a site of struggle between various strands of democratic and authoritarian politics, Islamism and neoliberalism. Both in its approach to the topic and in the important insights it provides, this book will be an original and lasting contribution to the literature on media, culture, and politics within and beyond the Middle East."--Marwan Kraidy, author of Reality Television and Arab Politics: Contention in Public Life

"It is a real treat to read a work on the Middle Eastern media that shows the sociological sophistication employed by Bilge Yesil. This book is packed with stimulating ideas on Turkish media, state, and society that cut through the familiar mind-numbing clichés. Not only categories that have served Middle East experts for so long, but also the myth of Turkish Model dissolves under her scrutiny. This is a timely book and a must-read for students of international communications and any students interested in the contemporary Middle East."--Gholam Khiabany, author of Iranian Media: The Paradox of Modernity