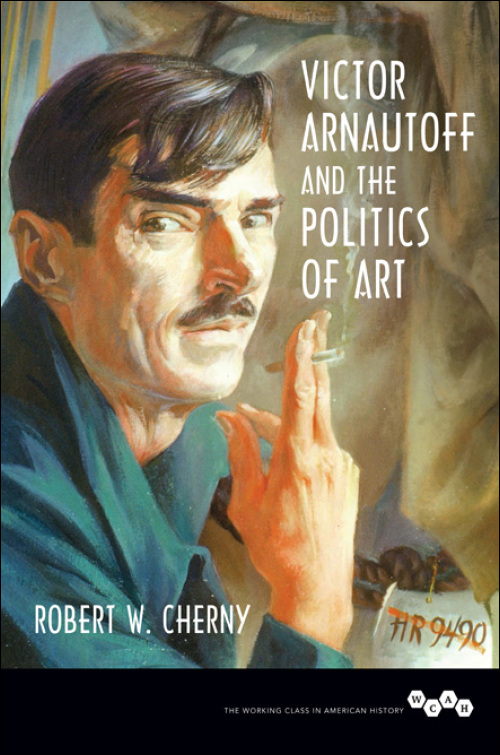 A leading West Coast modernist, Victor Arnautoff reigned as San Francisco's leading mural painter during the New Deal era. Yet that was only part of an astonishing life journey from Tsarist officer to leftist painter that reflected a century of tumult in politics and art.

Robert W. Cherny's masterful biography of Arnautoff braids the artist's work with his increasingly leftist politics and the tenor of his times. Delving into sources on Russian émigrés and San Francisco's arts communities, Cherny traces Arnautoff's life from refugee art student and assistant to Diego Rivera to prominence in the New Deal's art projects and a faculty position at Stanford University. As Arnautoff's politics moved left, he often incorporated working people and people of color into his treatment of the American past and present. In the 1950s, however, his participation in leftist organizations and a highly critical cartoon of Richard Nixon landed him before the House Un-American Activities Committee and led to calls for his dismissal from Stanford. Arnautoff eventually departed America, a refugee of another kind, now fleeing personal loss and the disintegration of the left-labor culture that had nurtured him, before resuming his artistic career in the Soviet Union that he had fought in his youth to destroy.

"[Cherny] does a magisterial job of placing the artist in the context of his times with fruitful discussion of the surrounding politics, social fabric, and ethnic influences. The result is a fascinating study of the artist and his times."--Newsletter of the San Francisco Museum and Historical Society

"Engaging and impressively researched. . . This is an interesting work that ties the biography of a fascinating historical actor to global art and politics."--Western Historical Quarterly

"A useful tool for scholars who want to pursue further work on Arnautoff's legacy and Russian art in the United States."--H-Net

"We have Cherny to thank for the detective work that produced this fine biography of an artist whose work and life tell us much about twentieth century history." --Pacific Historical Review

"Robert W. Cherny has written a fascinating and meticulously researched political biography exploring the life and work of the public muralist Victor Arnautoff." --The Journal of American History

"Victor Arnautoff and the Politics of Art relays a fascinating tale of an artist who made what at times appear to be counterintuitive life choices while remaining true to his vision of art as a weapon. The book illustrates how we can learn from controversial art." --California History

"Robert Cherny, a leading historian of California politics and former Fulbright Professor at Moscow State University in Russia has written the definitive account of the odyssey of Victor Arnautoff, a Czarist cavalry officer in World War I who migrated after the war to the Pacific Coast, became an influential and controversial figure in the San Francisco leftwing arts scene from the 1920s through the 1950s, and then returned to Russia after deciding to live out his life in the Soviet Union of the 1960s and 1970s. Cherny tells a spellbinding story that is at once illuminating and authoritative in its depiction of the Russian diaspora after the Bolshevik Revolution, the cultural politics of San Francisco from the Twenties through the Fifties, the intersection of individual artistic creativity, patronage and philanthropy, and public arts policy in California in the context of the Great Depression, World War II, and the Cold War. His book establishes a new gold standard in the field of California cultural history in the twentieth century."--William Issel, author of Church and State in the City: Catholics and Politics in Twentieth Century San Francisco

"This work, in being so faithfully executed and richly illustrated, will move every student of art and history to admiration. It is the beautifully crafted tale of an artist whose work and most unusual life reflected the destinies of two great nations."--Rhodri Jeffreys-Jones, author of The American Left: Its Impact on Politics and Society since 1990