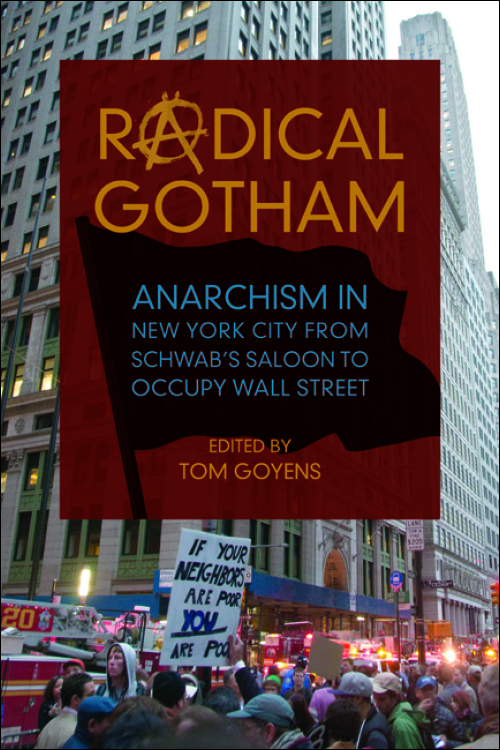 New York City's identity as a cultural and artistic center, as a point of arrival for millions of immigrants sympathetic to anarchist ideas, and as a hub of capitalism made the city a unique and dynamic terrain for anarchist activity. For 150 years, Gotham's cosmopolitan setting created a unique interplay between anarchism's human actors and an urban space that invites constant reinvention.

Tom Goyens gathers essays that demonstrate anarchism's endurance as a political and cultural ideology and movement in New York from the 1870s to 2011. The authors cover the gamut of anarchy's emergence in and connection to the city. Some offer important new insights on German, Italian, and Yiddish- and Spanish-speaking anarchists. Others explore anarchism's influence on religion, politics, and the visual and performing arts. A concluding essay looks at Occupy Wall Street's roots in New York City's anarchist tradition.

Tom Goyens is an associate professor of history at Salisbury University. He is the author of Beer and Revolution: The German Anarchist Movement in New York City, 1880-1914.

"Radical Gotham does an excellent job contesting popular conceptions of a radical break in anarchist history by documenting how these later movements were profoundly influenced by the practices and theories of their early immigrant comrades."--Lateral

"This volume will be essential reading to anyone interested in American anarchist history....In addition to the essays' overall high quality, the book's (well-organized!) footnotes provide useful fodder for future research." --The Journal of American History

"Radical Gotham is a timely and helpful investigation of New York City as an incubator for American misfits--immigrants, pacifists, and artists--and their evolving plans for a freer and more just world." --Journal of Social History

"Overall, the collection makes a good contribution to the study of radicalism. It breaks new historiographical ground and it is well written and cohesive. It is suitable for an undergraduate or graduate class on American social movements or anarchism." --Journal for the Study of Radicalism

"With its chapters on labor, class, gender, culture, and prefigurative politics, this is a cutting-edge synthesis that shows how anarchism survived from the 1880s to the present in New York City--one of the central nodes in global anarchist networks."--Kirwin Shaffer, coeditor of In Defiance of Boundaries: Anarchism in Latin American History

"An inspiring collection that brings together the eclectic, transnational, multiethnic, and resilient histories of anarchist activism in one of the great hubs of the movement—New York City. Tracing the long arc of this movement from its immigrant and working-class roots to the Occupy movement, this is a must-read for everyone interested in the history and evolution of radical social movements."—Jennifer Guglielmo, author of Living the Revolution: Italian Women's Resistance and Radicalism in New York City, 1880–1945