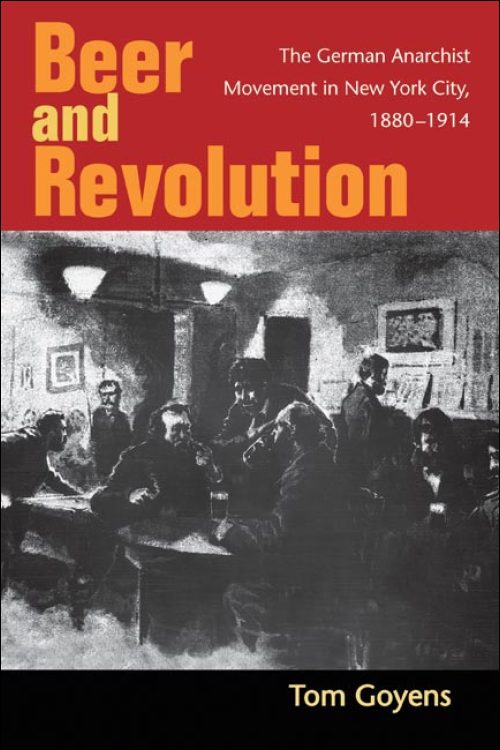 Beer and Revolution examines the rollicking life and times of German immigrant anarchists in New York City from 1880 to 1914. Offering a new approach to an often misunderstood political movement, Tom Goyens reveals a dedication less to bombs than to beer halls and saloons where political meetings, public lectures, discussion circles, fundraising events, and theater gatherings were held. By putting a human face on anarchism, Goyens helps readers understand an infamous political movement's grounding in festivity and defiance.

Goyens brings to life the fascinating relationship between social space and politics by examining how the intersection of political ideals, entertainment, and social activism embodied anarchism not as an abstract idea, but as a chosen lifestyle for thousands of women and men. He shows how anarchist social gatherings combined German working-class conviviality and a dedication to the principle that coercive authority was not only unnecessary, but actually damaging to full and free human development as well. Goyens also explores the broader circumstances in both the United States and Germany that served as catalysts for the emergence of anarchism in urban America and how anarchist activism was hampered by police surveillance, ethnic insularity, and a widening gulf between the anarchists' message and the majority of American workers.

Tom Goyens is an assistant professor of history at Salisbury University.

"Goyens . . . does a masterful job of placing leading anarchists such as Johann Most in a transnational context by detailing both the European and US aspects of their careers. . . . Scholars and students will find this is an interesting, informative book. Highly recommended."--Choice

"This well-researched study of anarchism in New York City makes a significant contribution to the history of radicalism, German ethnicity, and urban culture."--Journal of American History

“Beer and Revolution is an extraordinary piece of work, and a rare find. I am astonished at the level of sophistication: it advances recent scholarly developments in charting geopolitical space and resurrects the kind of setting--a mixture of bohemianism and political radicalism--that is of increasing interest to young people today.”--Paul Buhle, coeditor of the Encyclopedia of the American Left

"Beer and Revolution is an invaluable resource for anyone interested in the fascinating history of social and political radicalism in American immigrant communities. The work explores in rich detail the German anarchist subculture that flourished for several decades in New York City and the surrounding area. It presents a vivid picture of meeting places such as beer halls, beer gardens and cafes; of organizations such as social and political clubs, musical groups, labor organizations, intentional communities, and schools; of forms of expression such as speeches, lectures, newspapers, magazines, and theatrical performances; and of social activities such as picnics, banquets, celebrations and festivals. Along the way, Tom Goyens offers the reader an illuminating introduction to the social and historical context out of which this particular community emerged. The foremost lesson of this admirable work is that political movements cannot be understood adequately in terms of organizations, events and ideas, but must be studied more deeply in the context of the complex political culture in which they are embedded."--John Clark, author of Anarchy, Geography, Modernity: The Radical Social Thought of Elisée Reclus