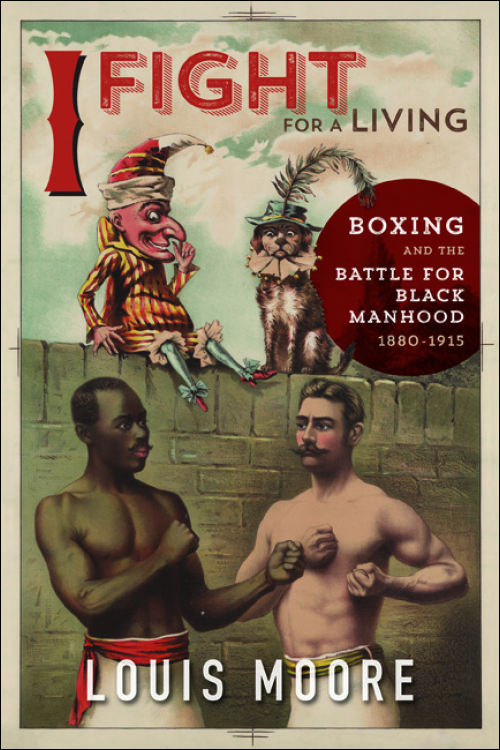 The black prizefighter labored in one of the few trades where an African American man could win renown: boxing. His prowess in the ring asserted an independence and powerful masculinity rare for black men in a white-dominated society, allowing him to be a man--and thus truly free.

Louis Moore draws on the life stories of African American fighters active from 1880 to 1915 to explore working-class black manhood. As he details, boxers bought into American ideas about masculinity and free enterprise to prove their equality while using their bodies to become self-made men. The African American middle class, meanwhile, grappled with an expression of public black maleness they saw related to disreputable leisure rather than respectable labor. Moore shows how each fighter conformed to middle-class ideas of masculinity based on his own judgment of what culture would accept. Finally, he argues that African American success in the ring shattered the myth of black inferiority despite media and government efforts to defend white privilege.

Louis Moore is an associate professor of history at Grand Valley State University. He is the author of We Will Win the Day: The Civil Rights Movement, the Black Athlete, and the Quest for Equality.

"Immensely readable. . . . I Fight for a Living is essential reading for anyone interested in 'the shadow of the black fist' of racism that loomed over the ring well into the twentieth century, and the African-American fight for equal footing amidst the inception of modern boxing."--Slugfestboston

"Its depth and breadth are impressive and will challenge scholars and students to see sport history in new ways." --The Journal of Southern History

"Moore provides valuable insight into the experience and impact of many other top-flight black boxers of the 1885-1915 period." --The Journal of American History

"Moore's analysis is a compelling one that deserves the serious attention of scholars of sport history and the African American experience." --The Historian

"I Fight for a Living: Boxing and the Battle for Black Manhood 1880-1915 is a fantastic and necessary contribution to the critical sociology of the race and sports paradigm, advancing conversations on boxing, race, masculinities, labor, and sports cultures. . . . By contextualizing fighting as both labor and a tool to challenge dominant ideologies, Moore broadens scholarly understandings in the sociology of sport and Black studies about the ways in which Black boxers asserted their agency by using sports as a medium to evade a racist job market and their success in the ring to disrupt the myth of Black inferiority." --International Review for Sociology of Sport

"A particularly powerful example of the creative ways in which young black men have used athletics to create opportunities for themselves and to combat stereotypes in a profoundly racist society. . . . I Fight for a Living is an important example of the ways in which historians can use cultural products to help understand the dynamics of power and resistance during this pivotal period of American history." --Journal of American Ethnic History

"Many sports history books in which authors analyze race focus on professional team sports. The history of professional team sports does not represent the full scope of the sporting experience, particularly for African Americans, and particularly during segregation. . . . In I Fight for a Living: Boxing and the Battle for Black Manhood, 1880 1915, Louis Moore writes about African American male boxers who not only fought but earned a living in the decades before and after the turn of the century." --Journal of African American History

"Compelling and well researched, Louis Moore’s I Fight For a Living traces the pugilistic exploits of nineteenth century black boxers inside the ring and, equally important, their effort to navigate the local manifestations of the global color line. Moore underscores their strategic deployment of middle-class demeanor, respectability, and a version of manhood to insist on greater economic opportunity, fairer treatment, and a better life. Given its sophisticated analysis of their travels, travails, and triumphs of black boxers, I Fight For a Living is a welcomed addition to bookshelves alongside Elliott Gorn's The Manly Art, Randy Roberts's Papa Jack, and Theresa Runstedtler's Jack Johnson, Rebel Sojourner."--Adrian Burgos Jr., author of Cuban Star: How One Negro League Owner Changed the Face of Baseball

"Moore moves the reader beyond Jack Johnson by telling the stories of a generation of African Americans who labored with their fists at the beginning of the twentieth century. He weaves a narrative of migratory labor, racism, masculinity, and consumption that shaped the lives of working fighters. Although these pugilistic laborers could reach the height of fame and fortune, racism limited opportunities and financial mismanagement led to economic ruin. Moore describes how boxers such as Joe Gans tried to secure their manhood and livelihood through the ring. I Fight for a Living reminds the reader that sports and labor need to be analyzed together."--Derrick E. White, coeditor of Winning While Losing: Civil Rights, the Conservative Movement, and the Presidency from Nixon to Obama

"I Fight for a Living is an enjoyable read which makes the convincing argument that African American prizefighters posed a unique set of challenges to Jim Crow white supremacy in the years preceding World War I."--Michael Ezra, author of Muhammad Ali: The Making of an Icon

Read an interview with Louis Moore on Public Books