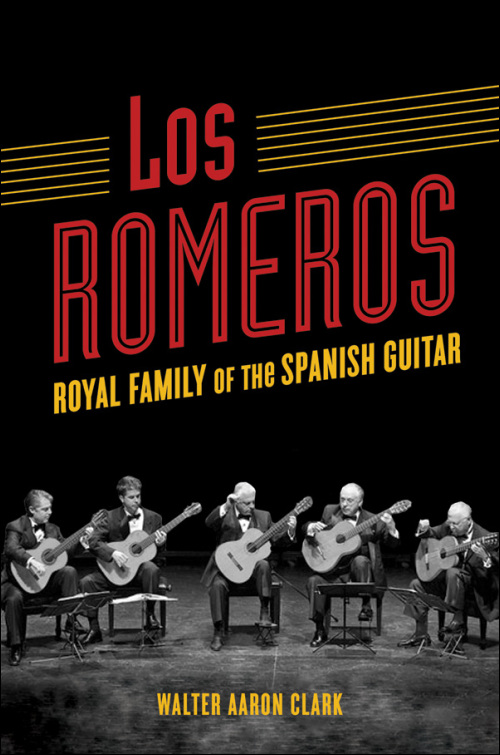 Spanish émigré guitarist Celedonio Romero gave his American debut performance on a June evening in 1958. In the sixty years since, the Romero Family—Celedonio, his wife Angelita, sons Celín, Pepe, and Angel, as well as grandsons Celino and Lito—have become preeminent in the world of Spanish flamenco and classical guitar in the United States.

Walter Aaron Clark's in-depth research and unprecedented access to his subjects have produced the consummate biography of the Romero family. Clark examines the full story of their genius for making music, from their outsider's struggle to gain respect for the Spanish guitar to the ins and outs of making a living as musicians. As he shows, their concerts and recordings, behind-the-scenes musical careers, and teaching have reshaped their instrument's very history. At the same time, the Romeros have organized festivals and encouraged leading composers to write works for guitar as part of a tireless, lifelong effort to promote the instrument and expand its repertoire.

Entertaining and intimate, Los Romeros opens up the personal world and unfettered artistry of one family and its tremendous influence on American musical culture.

* Publication of this book is supported by the Donna Cardamone Jackson Endowment of the American Musicological Society, funded in part by the National Endowment for the Humanities and the Andrew W. Mellon Foundation, and by the University of California, Riverside.

Walter Aaron Clark is Distinguished Professor of Musicology and the founder/director of the Center for Iberian and Latin American Music at the University of California, Riverside. His books include Isaac Albéniz: Portrait of a Romantic and Enrique Granados: Poet of the Piano. In 2016, King Felipe VI of Spain made him a Knight Commander of the Order of Isabel the Catholic.

"For the protraction of my musical education and the great pleasure of their company, I am truly grateful to the family Romero."--Sir Neville Marriner, from the foreword

"To see Los Romeros play is to witness them making love to an instrument that, in their hands, is transformed into the most beautiful human voice."--Jesús Lopez Cobos, from the foreword

"We are taken on a beautiful journey starting in the hills of southern Spain and traveling across the world in an exquisite poetic narrative that evokes the magic of the musical life of the Romero family. Their amazing guitar playing is central to this adventure, as they shared their passion with their audiences. The author gives us a wonderful insight into their lives and the enormous contribution they have made to the world of music."--David Russell, classical guitarist

"All the Romeros form a very close family that has bestowed on our guitar honors, nobility, and the best music. This book tells their story in a fashion worthy of them."--Manolo Sanlúcar, flamenco guitarist

"It is impossible to overestimate the impact that the Romeros have had on the world of the classical guitar. They’ve enthralled millions of listeners and inspired generations of players with their brilliant technique, phenomenal musicianship, and joyous stage artistry. The LAGQ feels blessed to be part of their grand legacy, and we applaud the poetry and beauty that the author brings to this fascinating subject."--The Los Angeles Guitar Quartet (John Dearman, Matthew Greif, William Kanengiser and Scott Tennant)