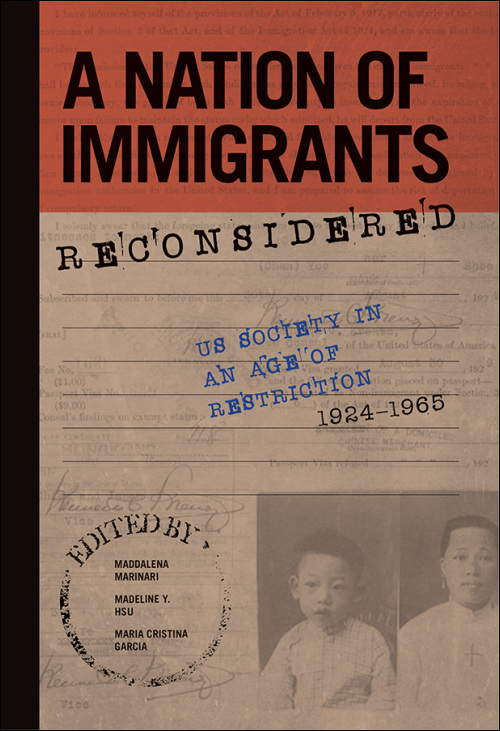 Scholars, journalists, and policymakers have long argued that the 1965 Immigration and Nationality Act dramatically reshaped the demographic composition of the United States. In A Nation of Immigrants Reconsidered, leading scholars of immigration explore how the political and ideological struggles of the "age of restriction"--from 1924 to 1965--paved the way for the changes to come. The essays examine how geopolitics, civil rights, perceptions of America's role as a humanitarian sanctuary, and economic priorities led government officials to facilitate the entrance of specific immigrant groups, thereby establishing the legal precedents for future policies. Eye-opening articles discuss Japanese war brides and changing views of miscegenation, the recruitment of former Nazi scientists, a temporary workers program with Japanese immigrants, the emotional separation of Mexican immigrant families, Puerto Rican youth’s efforts to claim an American identity, and the restaurant raids of conscripted Chinese sailors during World War II.

Maddalena Marinari is an assistant professor of history at Gustavus Adolphus College. She is the author of From Unwanted to Restricted: Italian and Jewish Mobilization against Restrictive Immigration Laws, 1882-1965. Madeline Y. Hsu is a professor of history at the University of Texas at Austin. She is the author of the award-winning The Good Immigrants: How the Yellow Peril Became the Model Minority. María Cristina Garcia is the Howard A. Newman Professor of American Studies at Cornell University. Her most recent book is The Refugee Challenge in Post-Cold War America.

"This anthology provides an excellent analysis of immigration policy changes in the 1924-1965 period. . . . These essays are well worth reading and offer a new, more comprehensive look at this period." --Journal of American History

"This book makes a good case for why we must understand the mid-century period as part of a larger history of US immigration. As an overview of some of the best recent work on the period, this compilation stands out." --History

"This important collection revises our understanding of a relatively understudied period in the historiography of US immigration and citizenship, the years between the institution of national origins quotas in the 1920s and their abrogation in the 1960s. As such, it deserves wide scholarly attention."--Kunal M. Parker, author of Making Foreigners: Immigration and Citizenship Law in America, 1600–2000

"Bringing together essays by rising stars and established leaders in US immigration history, this volume opens our understanding of the complexities of the national origins era by highlighting understudied dynamics, advancing new periodizations, and bringing new historical actors to the fore. Taken as a whole, the essays insist on the centrality of racial-nationalist boundary-making—and of struggles to defeat it—within the broader history of the US in the world in the mid-twentieth century."--Paul A. Kramer, author of The Blood of Government: Race, Empire, the United States, and the Philippines