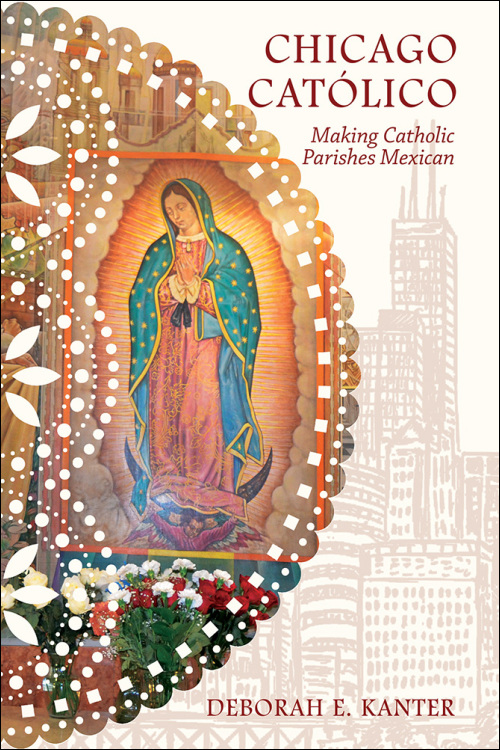 Today, over one hundred Chicago-area Catholic churches offer Spanish-language mass to congregants. How did the city's Mexican population, contained in just two parishes prior to 1960, come to reshape dozens of parishes and neighborhoods?

Deborah E. Kanter tells the story of neighborhood change and rebirth in Chicago's Mexican American communities. She unveils a vibrant history of Mexican American and Mexican immigrant relations as remembered by laity and clergy, schoolchildren and their female religious teachers, parish athletes and coaches, European American neighbors, and the immigrant women who organized as guadalupanas and their husbands who took part in the Holy Name Society. Kanter shows how the newly arrived mixed memories of home into learning the ways of Chicago to create new identities. In an ever-evolving city, Mexican immigrants and Mexican Americans’ fierce devotion to their churches transformed neighborhoods such as Pilsen.

The first-ever study of Mexican-descent Catholicism in the city, Chicago Catolico illuminates a previously unexplored facet of the urban past and provides present-day lessons for American communities undergoing ethnic integration and succession.

Deborah E. Kanter is John S. Ludington Endowed Professor of History at Albion College. She is the author of Hijos del Pueblo: Gender, Family, and Community in Rural Mexico, 1730–1850.

"For Chicago history and urban history in general, Kanter’s book provides consequential new insights about neighborhood change, ethnic progression and the role of religious institutions. This is a book about Mexicans and Mexican-Americans, but it is also a significant look at how Chicago works, and how American cities work." --Third Coast Review

"Those interested in Chicago's ethnic neighborhoods, in the growth of the second largest Mexican community in the United States, and the ways in which the Roman Catholic Church anchored, nurtured, and integrated these immigrants into American life will find the prodigious research gathered in this book truly astounding." --American Catholic Studies

"Kanter’s book reminds us that Mexican Catholicism has been an important part of U.S. Catholicism for much longer than many people realize, and not only near the border." --Commonweal Magazine

"Chicago Catolico reminds scholars of American religion that even a fine-grained study of a parish must be attentive to transnational migration flows and developments." --American Religion

"Deborah E. Kanter's Chicago Catolico shifts geography and interpretative frame in her meticulously researched and well-crafted study of Mexican American parish life in Chicago's Near West Side and Pilsen neighborhoods during the twentieth century." --Journal of American History

"By the late 19702, virtually al Pilsen parishes, previously white and ethnic, had become Mexican. Deborah E. Kanter's Chicago Catolico tells the story of this change in an engaging and accessible way. . . . a magnificent book." --Journal of the Illinois State Historical Society

"Chicago Catolico is the first book of its kind, a superb history of Mexican parish life in a city of diverse Catholic immigrants. Kanter relates a fascinating tale of faith, identity, and the transformation of a city's largest religious institution."--Timothy Matovina, author of Latino Catholicism: Transformation in America’s Largest Church

"Chicago Catolico not only describes the faith practices of Mexican immigrants, but also explores the social worlds of Catholicism and the ways in which the Church helped mark neighborhoods, assist immigrants in their transitions to the frigid Midwest, and provide people a sense of home. This book is an important and timely contribution to the growing field of Latino religious history."--Felipe Hinojosa, author of Latino Mennonites: Civil Rights, Faith, and Evangelical Culture