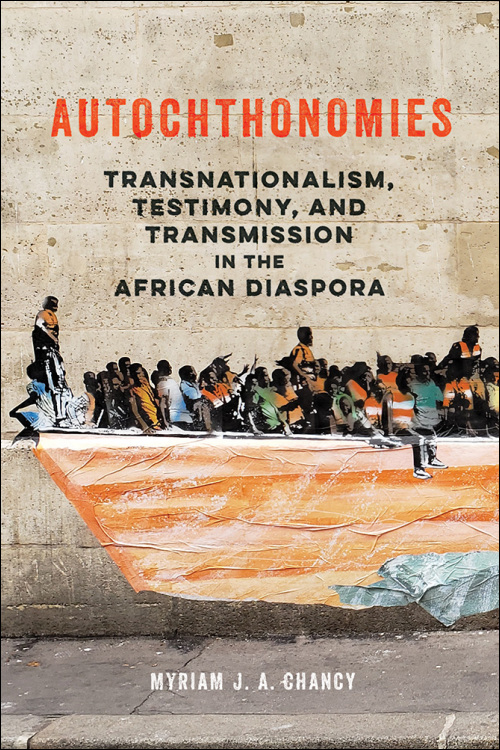 In Autochthonomies, Myriam J. A. Chancy engages readers in an interpretive journey. She lays out a radical new process that invites readers to see creations by artists of African descent as legible within the context of African diasporic historical and cultural debates. By invoking a transnational African/diasporic lens and negotiating it through a lakou or "yard space," we can see such identities transfigured, recognized, and exchanged. Chancy demonstrates how the process can examine the salient features of texts and art that underscore African/diasporic sensibilities and render them legible. What emerges is a potential for richer readings of African diasporic works that also ruptures the Manichean binary dynamics that have dominated previous interpretations of the material. The result: an enriching interpretive mode focused on the transnational connections between subjects of African descent as the central pole for reader investigation.

A bold challenge to established scholarship, Autochthonomies ranges from Africa to Europe and the Americas to provide powerful new tools for charting the transnational interactions between African cultural producers and sites.

Myriam J. A. Chancy is the Hartley Burr Alexander Chair of the Humanities at Scripps College. Her books include From Sugar to Revolution: Women's Visions of Haiti, Cuba, and the Dominican Republic and Framing Silence: Revolutionary Novels by Haitian Women.

"The strength of this volume lies in the author's detailed textual analyses, both of works that fall short of centering the epistemologies and ontologies of black people and of those that do so effectively. . . . Recommended." --Choice

"A richly layered and thought-provoking text. . . . Chancy seeks to reorientate the academic lens through which African diasporic cultures are viewed." --Ethnic and Racial Studies

"Thoroughly ambitious, philosophically rich, and rigorously interdisciplinary, Autochthonomies is a worthwhile read. . . . From the onset, it is clear that this book is far from a convention study of African diasporic cultures." --New West Indian Review

"In its critique of Western rationality, Enlightenment categories, and hierarchical orderings, this book makes a significant contribution. Chancy uses race and gender theory in smart and provocative ways. Her elucidation of difficult texts and contexts is clear and convincing. The research is well presented, the arguments well developed, and the conclusions intellectually satisfying."--Françoise Lionnet, author of Writing Women and Critical Dialogues: Subjectivity, Gender, and Irony