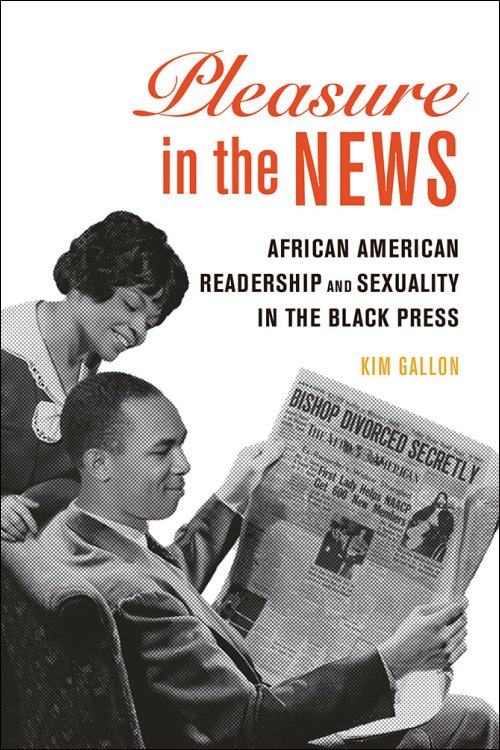 Critics often chastised the twentieth-century black press for focusing on sex and scandal rather than African American achievements. In Pleasure in the News, Kim Gallon takes an opposing stance—arguing that African American newspapers fostered black sexual expression, agency, and identity.

Informative and empowering, Pleasure in the News redefines the significance of the black press in African American history and advancement while shedding light on the important cultural and social role that sexuality played in the power of the black press.

Kim Gallon is an associate professor in the Department of History at Purdue University.

"The institution of Black Press, as Pleasure in the News outlines, contained a diversity of approaches to sexuality, in such papers as the Baltimore Afro-American, Chicago Defender, Pittsburgh Courier, New York Amsterdam News, and Philadelphia Tribune. It is remarkable that Gallon is able to weave these newspapers together so skillfully and the archival research involved in this study is impressive. . . . In centering sexuality and pleasure, Gallon thoughtfully highlights ambivalences that the Black Press and its readership grappled with and the always important question of how much a newspaper's content is shaped by its reader' perceived desires." --American Periodicals

"Gallon succeeds in outlining the mutual liberalization of the Black press and Black urban communities in the interwar period. She conveys the dynamism of an era when newspapers thrust race leaders and new migrants into public reconsideration of how Blackness could be embodied in the twentieth century." --Journal of American History

"Blending unprecedented research into the African American press, and the journalists and editors who put the papers out, with a careful synthesis of the existing scholarship, Pleasure in the News shows how opinions about sex behavior impacted reading publics over several decades of profound change in the black experience. Kim Gallon's systematic analysis of an almost endless news cycle of marital infidelities, scandalous divorces, celebrity drag queens, and low-down queers of all kinds provides a fresh angle on what are now classic questions in the field. How did respectability impact performativity, how did opinion makers command and defer to sexual consumers, and what did all of this mean for the experience of black desire within the marginal spaces of the modern metropolis?"--Kevin Mumford, author of Not Straight, Not White: Black Gay Men from the March on Washington to the AIDS Crisis