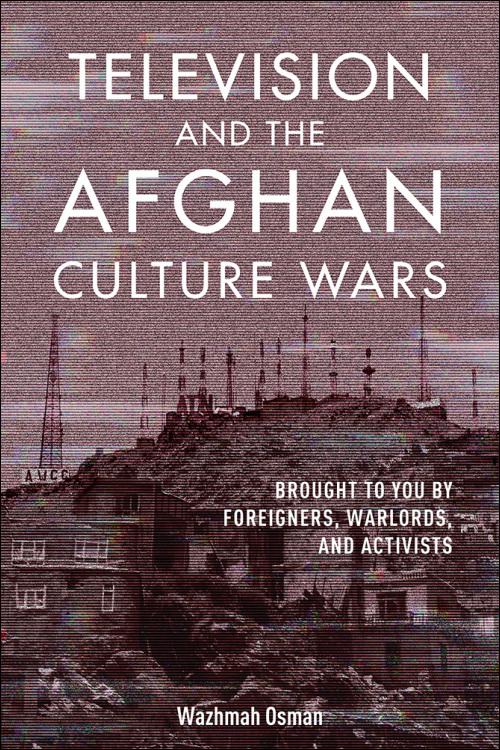 Portrayed in Western discourse as tribal and traditional, Afghans have in fact intensely debated women's rights, democracy, modernity, and Islam as part of their nation building in the post-9/11 era. Wazhmah Osman places television at the heart of these public and politically charged clashes while revealing how the medium also provides war-weary Afghans with a semblance of open discussion and healing. After four decades of gender and sectarian violence, she argues, the internationally funded media sector has the potential to bring about justice, national integration, and peace.

Fieldwork from across Afghanistan allowed Osman to record the voices of Afghan media producers and people from all sectors of society. In this moving work, Afghans offer their own seldom-heard views on the country's cultural progress and belief systems, their understandings of themselves, and the role of international interventions. Osman looks at the national and transnational impact of media companies like Tolo TV, Radio Television Afghanistan, and foreign media giants and funders like the British Broadcasting Corporation and USAID. By focusing on local cultural contestations, productions, and social movements, Television and the Afghan Culture Wars redirects the global dialogue about Afghanistan to Afghans and thereby challenges top-down narratives of humanitarian development.

Wazhmah Osman is a filmmaker and assistant professor in the Klein College of Media and Communication at Temple University. She is the codirector of the critically acclaimed documentary Postcards from Tora Bora and the coauthor of Afghanistan: A Very Short Introduction.

"Osman's book is a lucid read about complicated dynamics." --Interventions

"Osman's analysis of the televisual medium in Afghanistan is valuable and serves as a timely marker of the end of an era and the beginning of another." --Media, Culture, and Society

"An excellent introductory text on contemporary Afghanistan through a non-western perspective that centers the everyday life, agency, and desires of ordinary Afghans." --International Journal of Middle East Studies

"In Television and the Afghan Culture Wars, Wazhmah Osman takes readers on a powerful tour of Afghan media, politics, and society. . . . A rich analysis of the local-global nexus. . . . Fiercely critical of the imperial gaze." --Television and New Media

"Television and the Afghan Culture Wars poignantly critiques discourses of failure and immutability, bringing to the foreground the dynamism and talents of an Afghan population that is well-integrated with global flows of consumption and entertainment. Nuanced and deeply researched." --Iranian Studies

"A compelling analysis . . . Osman does an excellent job of articulating the histories and traces of what she calls both foreign and indigenous forms of modernisation, and helpfully details the narratives of successive foreign incursions and their backlashes. She convincingly shows that any perspective which poses contemporary American/global ideas of modernity as being in direct contrast with deep-seated and supposedly static forms of tribal patriarchy and tradition is of little help in understanding the contemporary situation." --Critical Studies in Television

"Television and the Afghan Culture Wars is an insightful, powerful book. Weaving together nuanced ethnography, complex media theory, and even a touch of personal memoir, Osman provides a compelling perspective on the world of Afghan television. Nuanced and deeply researched, the book is an important contribution to a number of fields, including war and conflict studies, media globalization, and development communication."--Matt Sienkiewicz, author of The Other Air Force: U.S. Efforts to Reshape Middle Eastern Media since 9/11

"This is the first richly observed ethnographic account of the landscape of media in post-US invasion Afghanistan. Osman’s self-reflexive voice in telling the story of the dynamic media field in Afghanistan is in and of itself of import. The limited scholarship that exists on media and democracy under occupation in the Global South tends to reproduce paternalistic narratives of development. In contrast, this critical work foregrounds the geopolitical context that leads to a television 'boom,' highlighting the important role of women and ethnic minority communities in Afghan media production and consumption. Television and the Afghan Culture Wars is a must read for scholars and students of global media and American empire."--Paula Chakravartty, coeditor of Race, Empire, and the Crisis of the Subprime