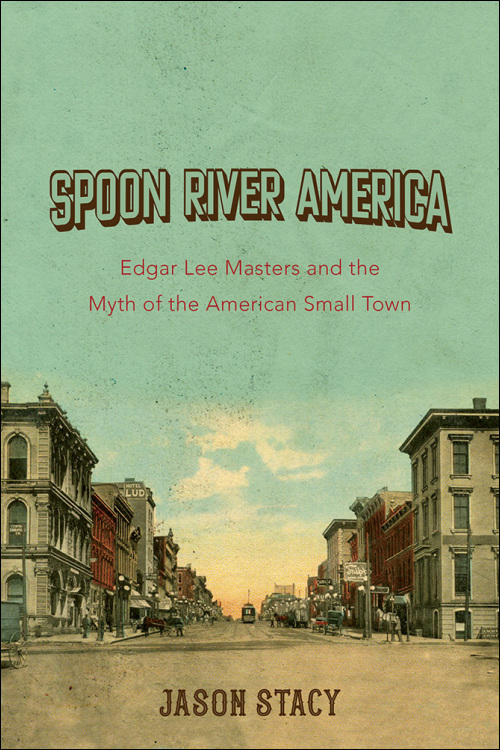 A literary and cultural milestone, Spoon River Anthology captured an idea of the rural Midwest that became a bedrock myth of life in small-town America. Jason Stacy places the book within the atmosphere of its time and follows its progress as the poetry took root and thrived. Published by Edgar Lee Masters in 1915, Spoon River Anthology won praise from modernists while becoming an ongoing touchstone for American popular culture. Stacy charts the ways readers embraced, debated, and reshaped Masters's work in literary controversies and culture war skirmishes; in films and other media that over time saw the small town as idyllic then conflicted then surreal; and as the source of three archetypes—populist, elite, and exile—that endure across the landscape of American culture in the twenty-first century.

A wide-ranging reconsideration of a literary landmark, Spoon River America tells the story of how a Midwesterner's poetry helped change a nation's conception of itself.

Jason Stacy is a professor of history and social science pedagogy at Southern Illinois University, Edwardsville. He is the author of Walt Whitman's Multitudes: Labor Reform and Persona in Whitman’s Journalism and the First Leaves of Grass, 1840–1855 and editor of Leaves of Grass, 1860: The 150th Anniversary Facsimile Edition.

"Highly recommend this extensively researched and engaging book, Spoon River America to American culture scholars and teachers and to all who love Spoon River Anthology." --Journal of American Culture

"Cogent and persuasive. By situating Spoon River Anthology within a number of contexts--literary, biographical, historical, political, performance, reception history--Stacy shows us why the book has become an American classic and how it has maintained its staying power for more than one hundred years."--Marcia Noe, author of Susan Glaspell: Voice from the Heartland

"The influence of Masters’ 1915 bestseller extended to cinema, radio, television, and music, says Jason Stacy. Ozzie and Harriet and Holden Caulfield find commonality with Jimmy Stewart’s movies and rocker Keith Richards in this 'history of a book and its impact.'"--Herbert K. Russell, author of Edgar Lee Masters: A Biography