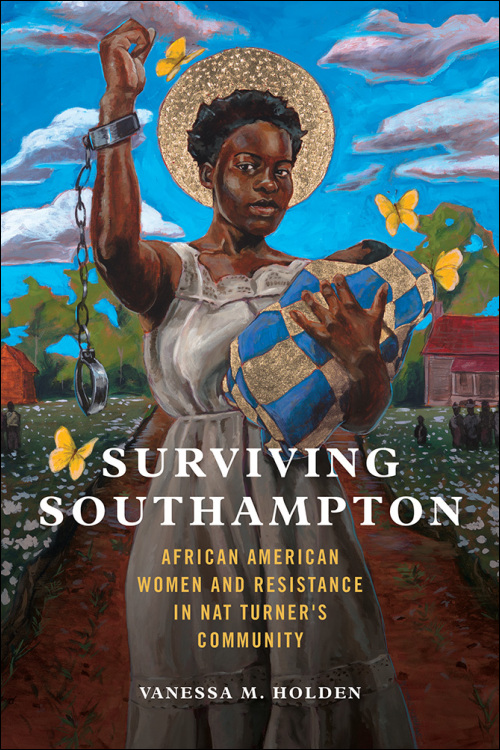 The 1831 Southampton Rebellion led by Nat Turner involved an entire community. Vanessa M. Holden rediscovers the women and children, free and enslaved, who lived in Southampton County before, during, and after the revolt. Mapping the regions multilayered human geography, Holden draws a fuller picture of the inhabitants, revealing not only their interactions with physical locations but also their social relationships in space and time. Her analysis recasts the Southampton Rebellion as one event that reveals the continuum of practices that sustained resistance and survival among local Black people. Holden follows how African Americans continued those practices through the rebellions immediate aftermath and into the future, showing how Black women and communities raised children who remembered and heeded the lessons absorbed during the calamitous events of 1831.

Vanessa M. Holden is an assistant professor of history at the University of Kentucky.

"With intricate research and deft analysis, Vanessa M. Holden presents a bold new exploration into Nat Turner’s Southampton Rebellion of 1831 and the imperative roles women and children played in the ongoing fight for Black survival. " --Ms.

"Vanessa Holden successfully moves our attention from Nat Turner to his community at a time when the appeal for uncovering societies of resistance has never been more apparent." --Civil War Monitor

"Surviving Southampton insists that women’s voices be heard, heeded, and remembered in understanding and commemorating the Southampton Rebellion and provides a model for revisiting slave revolts and other moments of rupture." --Black Perspectives

"An important new perspective on the Turner rebellion for readers of Black U.S. history." --Library Journal

"Surviving Southampton is a searing history of the community that made Nat Turner and his community rebellion possible. Holden's study is a bold and nuanced account of how Black women helped sustain the rebellion and map new ways to survive the aftermath." --Southern Journal of History

"Holden's well-told account of Nat Turner's rebellion is a welcome addition to the literary canon of the most significant and enduring Black uprising in antebellum America. . . . Highly recommended." --Choice

"Vanessa M. Holden's new book, Surviving Southampton, provides a new perspective on the Southampton Rebellion. Holden departs from past scholarship by situating the rebellion, not around the man at its head, but in the communities that provided its origin." --Register of the Kentucky Historical Society

"Vivid, engaging, and illuminating. The author’s focus on the role of women, children, and community involvement offers a richer understanding of the events surrounding the Southampton Rebellion."--Cheryl LaRoche, author of Free Black Communities and the Underground Railroad: The Geography of Resistance

"Very few scholarly texts force readers to completely reimagine iconic events. In Surviving Southampton, Vanessa Holden introduces her readers to an understudied cast of characters involved in the most infamous slave rebellion of the nineteenth century--refashioning a well-known segment of history. Through court records and oral histories, Holden centers women and children as participants, combatants, and survivors who resisted slavery’s yoke in the years before, during, and following the Southampton Rebellion. This book is required reading for anyone interested in the study of enslaved resistance."--Erica Armstrong Dunbar, Rutgers University