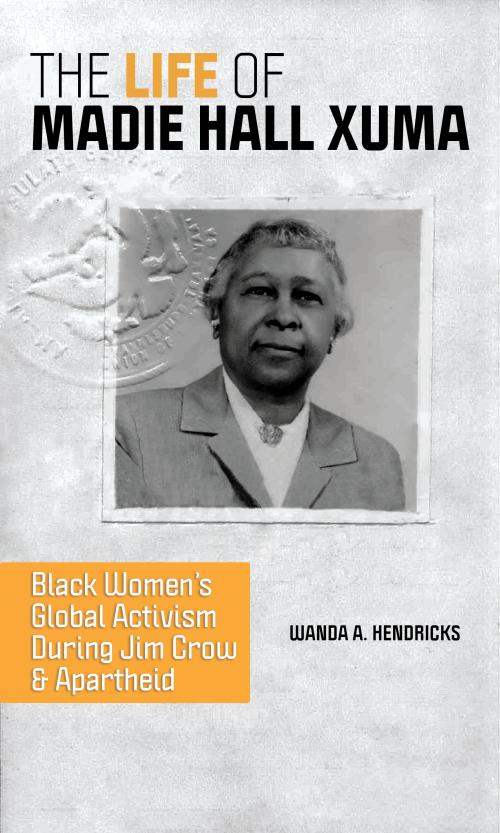 The Life of Madie Hall Xuma

Revered in South Africa as an African American "Mother of the Nation," Madie Beatrice Hall Xuma spent her extraordinary life immersed in global women's activism. Wanda A. Hendricks's biography follows Hall Xuma from her upbringing in the Jim Crow South to her leadership role in the African National Congress (ANC) and beyond. Hall Xuma was already known for her social welfare work when she married South African physician and ANC activist Alfred Bitini Xuma. Becoming president of the ANC Women’s League put Hall Xuma at the forefront of fighting racial discrimination as South Africa moved toward apartheid. Hendricks provides the long-overlooked context for the events that undergirded Hall Xuma’s life and work. As she shows, a confluence of history, ideas, and organizations both shaped Hall Xuma and centered her in the histories of Black women and women’s activism, and of South Africa and the United States.

* Publication was supported by a grant from the Howard D. and Marjorie L. Brooks Fund for Progressive Thought.

Wanda A. Hendricks is a distinguished professor emerita of history at the University of South Carolina. Her books include Fannie Barrier Williams: Crossing the Borders of Region and Race and Gender, Race and Politics in the Midwest: Black Club Women in Illinois.

"An amazing narrative undergirded by unparalleled research on Hall Xuma and the locations in which the story takes place. This book allows the reader to immerse themself in life as it was lived in Jim Crow and in apartheid. Despite the fact that it centers on one woman, the author has taken great care to create both of the worlds in which Hall Xuma lived, as well as a non-geographical world of Black women’s affiliations, social service activities, families, and friendships. Hendricks has been ambitious, and it has paid off."--Glenda Elizabeth Gilmore, author of Defying Dixie: The Radical Roots of Civil Rights, 1919–1950

"The Life of Madie Hall Xuma is the long-overdue first biography of a remarkable leader who fought across the global stage for racial justice, gender equity, and human rights in Jim Crow America and apartheid South Africa. Madie Hall Xuma has heretofore been ignored by scholars of American history and known primarily to South Africanists as the second wife of former African National Congress president Alfred B. Xuma, but Hendricks's intimate portrayal of Hall Xuma's compelling transnational political, civic, religious, and domestic life powerfully illustrates the intertwined histories of African and African American women’s political activism across the global color line."--Robert Trent Vinson, author of Albert Luthuli: Mandela before Mandela