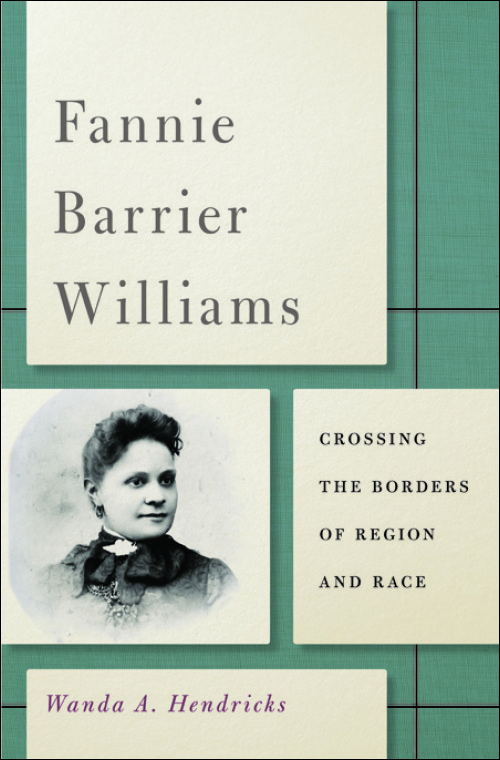 Born shortly before the Civil War, activist and reformer Fannie Barrier Williams (1855–1944) became one of the most prominent educated African American women of her generation. In this first biography of Williams, Wanda A. Hendricks focuses on the critical role geography and social position played in Williams's life, illustrating how the reform activism of Williams and other black women was bound up with place and space.

Growing up in Brockport, New York, a mostly white society that encouraged social equality and embraced her and her family, Williams was insulated from the political turmoil surrounding the debates about slavery and black rights. Hendricks shows how Williams became "raced" for the first time in early adulthood, when she became a teacher in Missouri and Washington, D.C., and faced the injustices of racism and the stark contrast between the lives of freed slaves and her own privileged upbringing. She carried this new awareness with her to Chicago, where she joined forces with women's clubs, the Unitarian church, and various other interracial social justice organizations to become a prominent spokesperson for progressive economic, racial, and gender reforms.

By highlighting how Williams experienced a set of freedoms in the North that were not imaginable in the South, this clearly written, widely accessible biography expands how we understand intellectual possibilities, economic success, and social mobility in post-Reconstruction America.

Wanda A. Hendricks is a distinguished professor emerita of history at the University of South Carolina and the author of The Life of Madie Hall Xuma: Black Women's Global Activism During Jim Crow and Apartheid and Gender, Race, and Politics in the Midwest: Black Club Women in Illinois.

"In 1899, the Washington Post referred to Williams as 'one of the best known colored women on the continent.' Hendricks' highly readable and long overdue biography explains why."--Women's Review of Books

"A highly readable, well-researched biography. . . . Hendricks bring the history of midwestern women's reform into such sharp focus that it forces us to ask and answer how Williams ever got relegated to what Hendricks describes as the 'supporting cast of reformers and women's club members.'"--Journal of Illinois History

"Wanda A. Hendricks skillfully employs a number of sources--church,school, and organization records and newspapers, as well as Fannie Barrier William's own words--to recreate Barrier Williams's ever-changing and complex world. . . . a well-structured and accessible biography of an important luminary in the late-nineteenth- and early-twentieth-century fight for social equality. Scholars in the fields of African American and women's history and beyond will find this volume immensely useful and valuable."--The Journal of Southern History

"Wanda A. Hendricks has done us an important service by giving Williams the biographical treatment she deserves. . . . an insightful overview of the "women's era" in African American history. . . . By mapping Williams's shifting identity during a tumultuous period in African American history, Hendricks has provided a crucial addition to the field of black women's history."--The Journal of American History

"A fascinating record of how even in this era of brutal racial retrenchment a well-positioned woman could insist that people might be able to listen to one another, work together, and even live together across the color line."--American Historical Review

"A new synthesis of compensatory and social history, this fine biography taps into our twenty-first century desire to trace networks, to interweave race, class, and gender, and to understand an outstanding woman both as her own person and as part of extensive cultural systems."--Journal of American Culture

"Lucidly written, smart, accessible, and with a wonderful sense of place, this book finally establishes Fannie Barrier Williams in the pantheon of African American women's history where she belongs."--Nancy A. Hewitt, author of Southern Discomfort: Women's Activism in Tampa, Florida, 1880s–1920s

Listen to an interview on WXXI