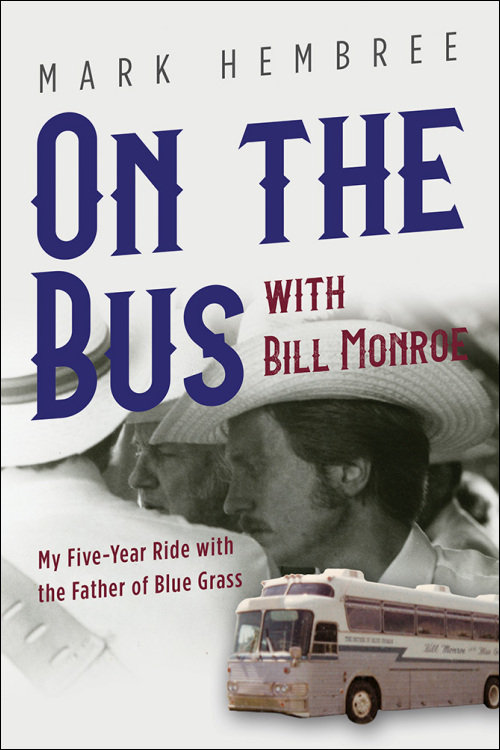 A backstage audition led Mark Hembree into a five-year stint (1979–1984) as the bassist for Bill Monroe's Blue Grass Boys. Hembree’s journey included playing at the White House and on the acclaimed album Master of Bluegrass. But it also put him on a collision course with the rigors of touring, the mysteries of Southern culture, and the complex personality of bandleader-legend Bill Monroe. Whether it’s figuring out the best time for breakfast (early) or for beating the boss at poker (never), Hembree gives readers an up-close look at the occasionally exalting, often unglamorous life of a touring musician in the sometimes baffling, always colorful company of a bluegrass icon.

The amusing story of a Yankee fish out of water, On the Bus with Bill Monroe mixes memoir with storytelling to recount the adventures of a Northerner learning new ways and the Old South.

Mark Hembree is a bassist, vocalist, writer, and editor. From 1979 to 1984, Hembree worked for Bill Monroe as a Blue Grass Boy. He cofounded the Nashville Bluegrass Band in 1984 and was a member until 1988.

"I look for it to be a hit in the bluegrass world and among musicologists, as it adds to what we know about Bill Monroe from a human relationship perspective. It has nuts and bolts but also some slipped wrenches and busted knuckles. . . . I salute Hembree and this book about life on the bus. In a very articulate and pleasant manner, Hembree manages to take us along for the ride with him through an important period of Bluegrass history." --Bluegrass Standard

"[Hembree] delivers his account of that time with the sort of lively, telling detail that can come only from someone who is reporting on lived-through experience. His book is a ride well worth taking." --Bluegrass Unlimited

"A book that feels fresh and welcome despite the familiarity of the subject — not because we finally come to understand Monroe in all his complexities, but because we meet a young, wide-eyed musician trying to find his way in the great man’s considerable shadow." --Chapter 16

"A rollicking ride down the bluegrass road with the Father of Bluegrass and his band, and Hembree serves as a truly entertaining tour guide." --No Depression

"An enjoyable memoir. . . . It's a valuable book and should be in the library of any Bill Monroe fan or those with interests in music history." --Bluegrass Today

"It paints a very, very, very true picture of life on the road, so much less glamorous than fans imagine--and the bus Monroe had when I was a Blue Grass Boy was even older and less reliable! I think this is an extremely valuable insight for those who have never lived this life. It also paints exquisite pictures of both Monroe and Kenny Baker--the men, not the performers--and this is as close a look as any who are curious will ever get."--Douglas B. (Ranger Doug) Green

"Do we need one more book on Bill Monroe? Yes, if it is as honestly written as this one, and by a musician who shared the road with him for five years, covering thousands of miles and thousands of shows."--Bill C. Malone, coauthor of Country Music USA: 50th Anniversary Edition