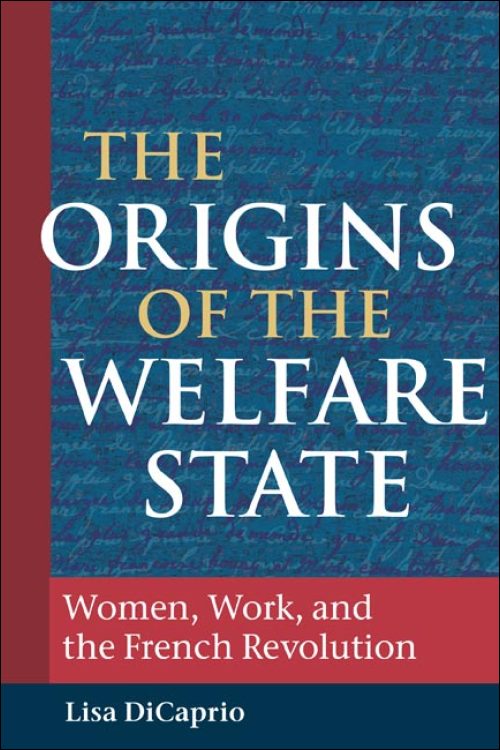 In May 1790, the French National Assembly created spinning workshops (ateliers de filature) for thousands of unemployed women in Paris. These ateliers disclose new aspects of the process which transformed Old Regime charity into revolutionary welfare initiatives characterized by secularization, centralization, and entitlements based on citizenship. This study is the first to examine women and the welfare state in its formative period at a time when modern concepts of human rights were elaborated.

In The Origins of the Welfare State, Lisa DiCaprio reveals how the women working in the ateliers, municipal welfare officials, and the national government vied to define the meaning of revolutionary welfare throughout the Revolution. Presenting demands for improved wages and working conditions to a wide array of revolutionary officials, the women workers exercised their rights as "passive citizens" capaciously and shaped the meanings of work, welfare, and citizenship. Looking backward to the Old Regime and forward to the nineteenth century, this study explores the interventionist spirit that characterized liberalism in the eighteenth century and serves as a bridge to the history of entitlements in the nineteenth and twentieth centuries.

Lisa DiCaprio is a visiting assistant professor at Washington and Lee University. She is coeditor with Merry E. Wiesner of Lives and Voices: Sources in European Women’s History and editor of The French Revolution: A History in Documents.

"Lisa Dicaprio's long-anticipated book was worth the wait. . . . Dicaprio demonstrates concretely an important set of insights into the political economy of the labor process, the possibilities for the political mobilization of women during the French Revolution, and the emergence of new conceptions and new ways of implementing of the interrelationships of charity, welfare and the state."--H-France Review