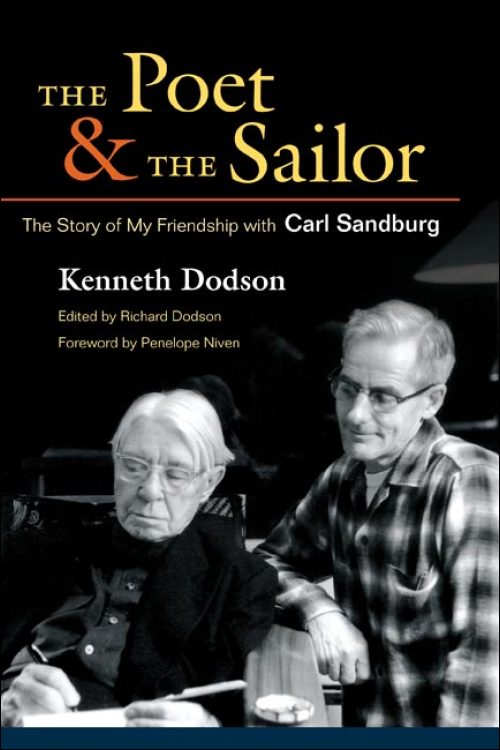 The Poet and the Sailor

Carl Sandburg first encountered Kenneth Dodson through a letter written at sea during World War II. Though Dodson wrote the letter to his wife, Letha, Sandburg read it in tears and said, "I've got to meet this man." Composed primarily of their correspondence that continued until Sandburg's death in 1967, The Poet and the Sailor is a chronicle of the forging of a deep friendship between the two men. Ranging over anything they found important, from writing and politics to health, humor, and home improvement plans, the letters are packed full of colorful description and period details. Arranged by Richard Dodson and accompanied by a foreword from Sandburg's noted biographer, Penelope Niven, the intimate letters also contain gripping wartime accounts from the Pacific theater, details about Hollywood moviemaking, and the struggles and triumphs of writing Remembrance Rock and Away All Boats.

"You are a man of a thousand stories. Find a framework. Then write it. Then overwrite it and cut it down. Let no day pass without writing it. When the going is good with you, your sentences march and hammer and sing low and what is called style is there in simple perfection. . . . You have only to go to your memories and to the wellsprings of your own heart for what is termed material. You have an eye for the vivid and can render it sparely. . . . Most of whatever you now need to be taught will have to come out of your own loving and toilsome practice."--Carl Sandburg to Kenneth Dodson, April 1949

"Now some suggest we hit [the Russians] with an atom bomb. . . . It is not possible for me to hob nob with Tavarish on his collectivist farm today. But is it time to bomb the curtain? . . . It might be wise for us to remember that our mass reaction to foreigners as persons is constantly changing. Nothing in world affairs remains static. Why should we expect it to? It is the eternal verities which remain unchanged. The things which, when all else fails, we fight for."--Kenneth Dodson to Carl Sandburg, March 1948

Kenneth Dodson was a lieutenant commander in the United States Navy and author of the famous wartime memoir Away All Boats. This volume was edited by Kenneth’s late son, Richard Dodson, who spent over five years compiling and editing the letters and correspondence.

"The Poet and the Sailor is a rewarding book in several ways and a daring and rewarding choice for the University of Illinois Press. It offers a glimpse into the aesthetic and the working methods of a major Illinois writer. . . . The reader finishes The Poet and the Sailor feeling that he or she has come to know two remarkable writers and human beings."--Journal of Illinois History

“The correspondence between Sandburg and Dodson suggests a considerable amount about Sandburg’s literary instincts, about how the older writer responsibly tutored the younger, and about Sandburg’s great human warmth. Even without the Sandburg connection, the Dodson letters are of great value, because they are the reflections of a bright, self-taught, sincere, and faithful man.”--Philip R. Yannella, author of The Other Carl Sandburg

"Dodson's war letters recounted the harrowing and sometimes exultant steps in [an] epic journey, and Sandburg increasingly admired not only the exploits of Dodson the sailor but the strengths of Dodson the writer. . . . As this book documents, Sandburg and Dodson built a lasting friendship on the foundation of their letters. . . . Dodson wrote to Sandburg as graphic an account of the war as military censorship and security would allow, and also entrusted to Sandburg his dreams about writing. In turn, Sandburg not only gave writing advice, he confided in Dodson some of the challenges in his own work, particularly Remembrance Rock. He also offered Dodson astute advice, writer to writer . . . but in the 1940s and '50s, at the pinnacle of his fame, he seldom had time to serve as a mentor for other writers. Dodson was an exception--and Sandburg took a deep interest in him as a promising writer, almost a surrogate son."--From the Foreword by Penelope Niven, author of Carl Sandburg: A Biography