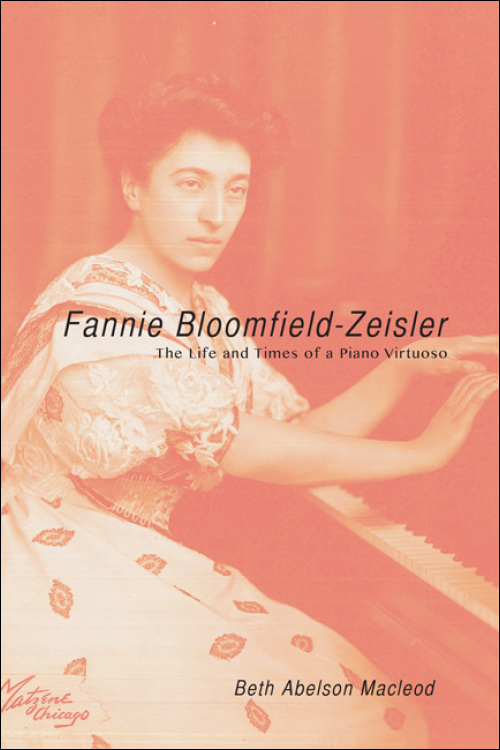 One of the foremost piano virtuosi of her time, Fannie Bloomfield-Zeisler reliably filled Carnegie Hall. As a "new woman," she simultaneously embraced family life and forged an independent career built around a repertoire of the German music she tirelessly championed. Yet after her death she faded into obscurity.

In this new biography, Beth Abelson Macleod reintroduces a figure long, and unjustly, overlooked by music history. Trained in Vienna, Bloomfield-Zeisler significantly advanced the development of classical music in the United States. Her powerful and sensitive performances, both in recital and with major orchestras, won her followers across the United States and Europe and often provided her American audiences with their first exposure to the pieces she played. The European-style salon in her Chicago home welcomed musicians, scientists, authors, artists, and politicians, while her marriage to attorney Sigmund Zeisler placed her at the center of a historical moment when Sigmund defended the anarchists in the 1886 Haymarket trial.

In its re-creation of a musical and social milieu, Fannie Bloomfield-Zeisler paints a vivid portrait of a dynamic artistic life.

Beth Abelson Macleod served as the arts and music librarian at Central Michigan University for over thirty years. She is the author of Women Performing Music: The Emergence of American Women as Instrumentalists and Conductors.

"Macleod adroitly documents both Fannie Bloomfield-Zeisler's tremendous musical accomplishments and zest for life. It seems the fire that burned around her as a girl became the woman's fire within."--Journal of Illinois History

"Macleod's biography offers a valuable contribution to a limited collection of literature on female musicians performing in the nineteenth and twentieth centuries. The author's work not only gives meaning to a heretofore famous pianist's achievements but also provides a volume exploring the dichotomy of the "new woman" striving to have a family and a career."--Journal of the Illinois State Historical Society

"The book is written in an informative, descriptive style and is not too academically dry or needlessly wordy. . . . For this reason, this book is very instructive to students in learning about nineteenth-century ways, attitudes, and lifestyles, as well as the prominence and musical stardom of an American Jewish woman."--The American Jewish Archives Journal

"Will fill a void in the literature on this remarkable pianist. The author has done an excellent job."--Judy Tsou, coeditor of Cecilia Reclaimed: Feminist Perspectives on Gender and Music

"An eloquently drawn portrait of Bloomfield-Zeisler, this volume examines the artist’s life as she strove to balance her fame and touring with the expectation that she be the 'ideal' mother and wife. With wonderful and imaginative attention to detail, Macleod brings the era to life, artfully weaving together a variety of disparate themes, from societal attitudes toward female artists, the blossoming of classical music in the United States, and anti-Semitism at home and abroad, to the cultural growth of Chicago, and even the vagaries of railroad travel in America at the time. This impressive work marks an important contribution to the often neglected study of women's role in music history."--Larry Ward, College of DuPage