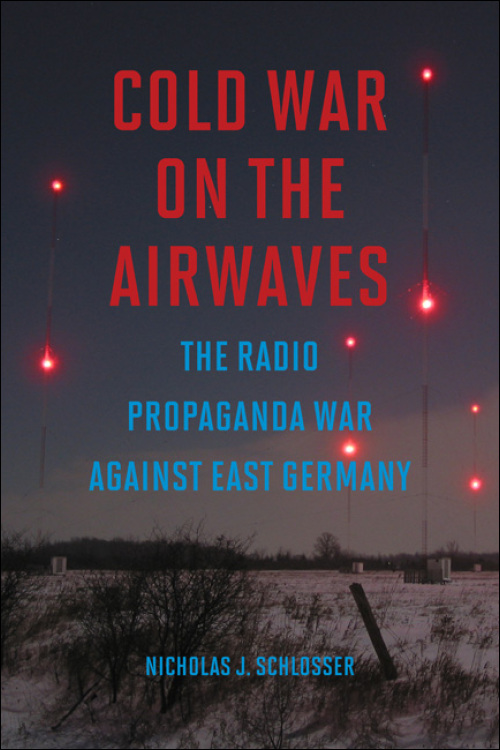 Founded as a counterweight to the Communist broadcasters in East Germany, Radio in the American Sector (RIAS) became one of the most successful public information operations conducted against the Soviet Bloc. Cold War on the Airwaves examines the Berlin-based organization's history and influence on the political worldview of the people--and government--on the other side of the Iron Curtain.

Nicholas J. Schlosser draws on broadcast transcripts, internal memoranda, listener letters, and surveys by the U.S. Information Agency to profile RIAS. Its mission: to undermine the German Democratic Republic with propaganda that, ironically, gained in potency by obeying the rules of objective journalism. Throughout, Schlosser examines the friction inherent in such a contradictory project and propaganda's role in shaping political culture. He also portrays how RIAS's primarily German staff influenced its outlook and how the organization both competed against its rivals in the GDR and pushed communist officials to alter their methods in order to keep listeners.

From the occupation of Berlin through the airlift to the construction of the Berlin Wall, Cold War on the Airwaves offers an absorbing view of how public diplomacy played out at a flashpoint of East-West tension.

Nicholas J. Schlosser is a historian at the U.S. Army Center of Military History. He received his bachelor's degree from Binghamton University in 2002 and his doctorate in history from the University of Maryland, College Park, in 2008. He is the coeditor of Counterinsurgency Leadership in Afghanistan, Iraq, and Beyond.

"There is much to learn and possibly relearn in this new addition to the literature of Cold War-era propaganda studies. . . . This intriguing case study, a microhistory of the Cold War tensions that plagued Berlin, reminds readers that this fractured city remained the epicenter of an enduring global conflict that lasted for decades. Highly recommended"--Choice

"Extensively annotated and superbly researched. . . . Schlosser has made an important contribution to the field of radio study by creating a tremendous "first stop" for researchers with an interest in the topic."--American Journalism

"Schlosser's ability to examine the propaganda wars of the Cold War as a three-way conversation between RIAS, the East German regime, and its people represents an impressive achievement in the study of political culture and public diplomacy."--H-Net

"This is the type of study propaganda historians have been waiting for. Schlosser writes a compelling narrative of one of the Cold War's most influential broadcasting stations. With a big budget, a large staff of experienced journalists, and a huge audience, Radio in the American Sector, located in Berlin, lay at the epicenter of the ideological war between East and West. By carefully assessing the impact, content, context, and meaning of the influential Radio in the American Sector, Schlosser provides analytical precision and rich documentary evidence to support his contention that RIAS was a key political actor in East and West Germany alike. Situating the RIAS story in the maelstrom of postwar German politics, Schlosser connects his story to some of the most important--and dangerous--developments of the Cold War. Scholars and general readers interested in German history, journalism, propaganda, and international relations will find this book rewarding and provocative."--Kenneth Osgood, author of Total Cold War: Eisenhower's Secret Propaganda Battle at Home and Abroad

"This book is a little gem. With meticulous research, Nicholas Schlosser has recreated a fascinating slice of Cold War history: the struggle for the airwaves of Berlin undertaken by the American-funded station known as Radio in the American Sector. Key episodes include the Berlin Airlift, the role of the station in the East German Rising of 1953, and its coverage of the building of the Berlin Wall. This is a valuable addition to modern German history, U.S. propaganda history, international broadcasting studies, and the scholarship of the Cold War."--Nicholas J. Cull, author of The Cold War and the United States Information Agency, 1945–1989