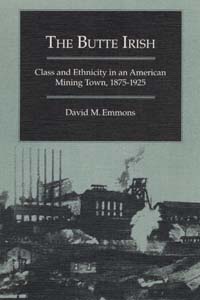 In this pioneering study, David Emmons tells the story of Butte's large and assertive population of Irish immigrants. He traces their backgrounds in Ireland, the building of an ethnic community in Butte, the nature and hazards of their work in the copper mines, and the complex interplay between Irish nationalism and worker consciousness.

From a treasure trove of "Irish stuff," the reports, minutes, and correspondence of the major Irish-American organizations in Butte, Emmons shows how the stalwart supporters of the RELA and the Ancient Order of Hiberians marched and drilled for Irish freedom---and how, as they ran the town, the miners' union, and the largest mining companies, they used this tradition of ethnic cooperation to ensure safe and steady work, Irish mines taking care of Irish miners. Butte was new, overwhelmingly Irish, and extraordinarily dangerous---the ideal place to test the seam between class and ethnicity.

David M. Emmons, professor of history at the University of Montana, is the author of Garden in the Grasslands: The Boomer Literature of the Central Plains.

"This is a very important book, perhaps one of the most important and best books ever written on Irish-American workers. "--Journal of American History

"Brings a new level of sophistication to the field of American history. David Emmons has written an elegant account of a remarkable western community, and one of the most impressive studies of the postfamine Irish."--Journal of Economic History

"Emmons has untangled the threads of Irish-American nationalism, worker radicalism, class divisions within the Irish community, and the effect of a new generation of Irish immigrants on old Irish associational life. It is a masterful job.--Mary Murphy, Montana: Magazine of Western History

Winner of the 1990 Robert Athearn Award of the Western History Association and an Honorable Mention for the 1990 James S. Donnelly, Sr., Prize in History and the Social Sciences from the American Conference for Irish Studies