In this trenchant work, James Barrett traces the political journey of a leading worker radical whose life and experiences encapsulate radicalism's rise and fall in the United States.

A self-educated wage earner raised in the slums of a large industrial city, William Z. Foster became a brilliant union organizer who helped build the American Federation of Labor and, later, radical Trade Union Educational League. Embracing socialism, syndicalism, and communism in turn, Foster rose through the ranks of the American Communist Party to stand at the forefront of labor politics throughout the 1920s. Yet by the time he died in 1961, in a Moscow hospital far from the meat-packing plants and steel mills where he had built his reputation, Foster's political marginalism stood as a symbol for the isolation of American labor radicalism in the postwar era.

Integrating both the indigenous and the international factors that determined the fate of American communism, William Z. Foster and the Tragedy of American Radicalism provides a new understanding of the basis for radicalism among twentieth-century American workers.

James R. Barrett, a professor of history at the University of Illinois at Urbana-Champaign, is the author of Work and Community in the Jungle: Chicago's Packinghouse Workers, 1894-1922 and other books. 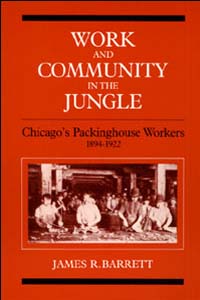 "If historian Jim Barrett had never written anything before . . . or ever again . . . his reputation would be secure with this title alone. This is more than a biography, it is a look inside the radical left world through which Foster travelled including the Socialist Party, IWW, syndicalism, anarchism and the Communist Party. . . . A must read for all those interested in radical history!"--The Socialist "

"Drawn from private papers, FBI files, court records, Soviet archives, contemporary press accounts, congressional reports, etc., this gem of a biography is an illuminating and judicious study of a major figure in 20th-century American radicalism. . . . [Barrett's] rich and complex portrait should be required reading for advanced students of modern American radicalism."--Choice"As much a study of American radicalism as it is of Foster himself."--Michigan Historical Review

"The strength of Barrett's biography lies in his analysis of Foster's radicalism. Barrett captures Foster's commitment to industrial unionism, his gentle elitism, his passion for organizing the unorganized, his willingness to follow Soviet policy directives, and his crusading zeal undeterred by defeat."--Journal of Illinois History

"James Barrett has provided a gripping account of America's most important radical of the first half of the twentieth century. ... Barrett's account of Foster provides a new synthesis in the approach to the history of American Communism, a synthesis that is not a bland compromise, but one that provides a methodology which provides historians with a valuable tool in their continued labours to understand America's radical past."--American Studies