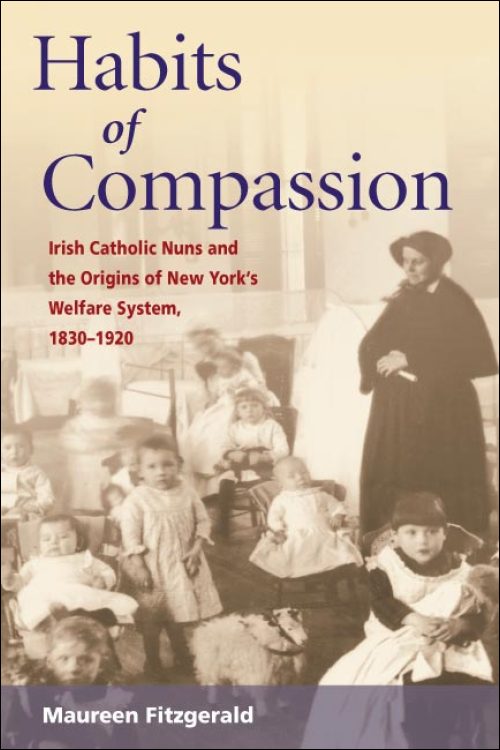 The Irish-Catholic Sisters accomplished tremendously successful work in founding charitable organizations in New York City from the Irish famine through the early twentieth century. Maureen Fitzgerald argues that their championing of the rights of the poor—especially poor women—resulted in an explosion of state-supported services and programs.

Parting from Protestant belief in meager and means-tested aid, Irish Catholic nuns argued for an approach based on compassion for the poor. Fitzgerald positions the nuns' activism as resistance to Protestantism's cultural hegemony. As she shows, Roman Catholic nuns offered strong and unequivocal moral leadership in condemning those who punished the poor for their poverty and unmarried women for sexual transgression. Fitzgerald also delves into the nuns' own communities, from the class-based hierarchies within the convents to the political power they wielded within the city. That power, amplified by an alliance with the local Irish Catholic political machine, allowed the women to expand public charities in the city on an unprecedented scale.

Maureen Fitzgerald is an associate professor of religious studies and American studies at the College of William and Mary.

"An impressive cultural and political history that will undoubtedly revise the standard interpretation of the origins of welfare reform."--National Catholic Weekly

"Well-written and conceived and will provide academics or general readers with a plethora of information and analysis about the activities of American Catholic sisters in nineteenth and early twentieth-century America."--American Catholic Studies

"It is a pleasure to read such a well-researched discussion of the many intersections between the work of the sisters and politics. This is an important corrective history that allows these clearheaded Irishwomen to emerge from the shadows of mainstream history."--Journal of American History

"The story of the collective accomplishments of women religious in America has never been told in its entirety, and indeed, given its richness and complexity, one can wonder if any telling could ever do complete justice to it. However that might be, Maureen Fitzgerald has succeeded impressively in narrating part of that story in her book. . . . Habits of Compassion is the result of thoroughgoing and meticulous research and is replete with interesting and illuminating information. It should be considered required reading for anyone who wants to be informed of a very important, but hitherto neglected, aspect of modern American history."--FCS Quarterly

"With this ambitious and provocative study, Maureen Fitzgerald contributes substantively to the burgeoning field of scholarship acknowledging the seminal roles women religious have played historically in the formation of American culture and society."--Catholic Historical Review

“It is not only one of the most sophisticated works that we have on nuns in nineteenth-century America, but it also reminds us how central religion--whether Protestant or Catholic--was to the invention of many of the institutions of the American state.”--Journal of the Gilded Age and Progressive Era

Co-winner of the 2006 First Book Prize of the Berkshire Conference of Women Historians.