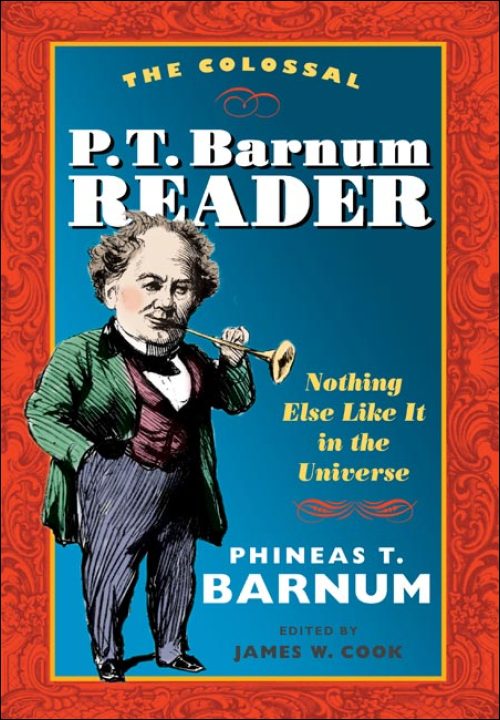 Nothing Else Like It in the Universe
Author: Phineas T. Barnum
Edited by James W. Cook
An encyclopedic treasure trove from the mastermind behind "The Greatest Show on Earth"
Paper – $20.95
978-0-252-07295-6
Paperback: 01/01/2005
Cloth: 01/01/2005
Buy the Book Request Desk/Examination Copy Request Review Copy Request Rights or Permissions Request Alternate Format Preview

The P. T. Barnum Reader reveals the trailblazing American showman P. T. Barnum as, by turns, a moral reformer, a habitual hoaxer, an insightful critic, a savvy "puffer," a master of images, a sparkling writer, a relentless provocateur, and an early advocate of "family" entertainments. Taken together, these selections paint a new and more complete portrait of this complex man than has ever been seen before.

James W. Cook's The Colossal P. T. Barnum Reader is the largest collection of Barnum's works ever produced. Included are excerpts from his pseudo-autobiographical novel The Adventures of an Adventurer (1841), his European letters from 1844-46 informing readers of the New York Atlas of his regal reception overseas, and a large selection from his Ancient and Modern Humbugs of the World, Barnum's 1864-65 insider's look into the frauds of nineteenth-century American culture. It offers a glimpse of Tom Thumb's minstrel and singing performances in front of Queen Victoria, Barnum's many fraudulent representations of the supposedly ancient Joice Heth, and a more immediate, less filtered sense of Barnum as cultural and social critic in his serialized writings and travelogues. This volume also features reproductions of difficult to find posters from Barnum's two-decade collaboration with the prominent New York lithographers, Currier and Ives, and vintage photographs.

Finally, the reader also helps us to understand Barnum's role in building the modern culture industry. We follow his career from itinerant hawker, hardly distinguishable from his pre-industrial forebears, to manager of the world's first show business empire, with a staff of thousands and brand recognition across four continents. The Colossal P. T. Barnum Reader tracks the shifting personas of the great showman, his representational choices, and his publics across the nineteenth century.

James W. Cook is an associate professor of history and American culture at the University of Michigan. He is the author of The Arts of Deception: Playing with Fraud in the Age of Barnum.

"Barnum--arguably more than any other nineteenth-century impresario--transcended local cultural markets to cultivate a powerful and profitable presence on the national and global stage under the guise of providing educational entertainment for diverse audiences of all ages. Using fascinating, funny, and informative sources, Cook offers an excellent showcase of the central role that nineteenth-century showman P. T. Barnum played in laying the foundations of the modern culture industry."--Janet M. Davis, author of The Circus Age: Culture and Society under the American Big Top