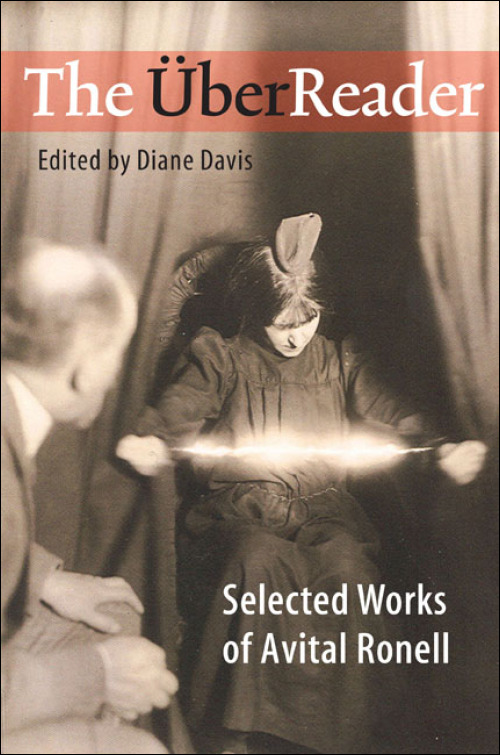 With courage and humor, Avital Ronell takes thinking and writing into wild and dangerous places. The ÜberReader introduces her groundbreaking work on drug rhetoric, technology's fatal attractions, and the odd prestige of stupidity. The ÜberReader includes previously uncollected essays, selections from her books, and some of her most powerful public talks.

An extensive introduction by Diane Davis surveys and situates Ronell's hard-hitting work, and recalls some of the most important critical responses it has provoked.

Avital Ronell is a professor of German, comparative literature, and English at New York University, where she directs the Research in Trauma and Violence project. She is author of Dictations: On Haunted Writing, The Telephone Book, Crack Wars, Finitude’s Score, Stupidity, and The Test Drive. Diane Davis is an associate professor of rhetoric at the University of Texas at Austin. She is the author of Breaking Up [at] Totality: A Rhetoric of Laughter.

"Avital Ronell has put together what must be one of the most remarkable critical oeuvres of our era. . . . Zeugmatically yoking the slang of pop culture with philosophical analysis, forcing the confrontation of high literature and technology or drug culture, Avital Ronell produces sentences that startle, irritate, illuminate. At once hilarious and refractory, her books are like no others."--Jonathan Culler, Diacritics

"Where does one find that mix of clear, quick, unexpected, spectacular, and precise readings other than in Ronell's work? Her pages are singular. She brings us into contact with urgent, traumatic cultural moments at the same time that she makes the case for reading philosophy and literature. We are thrown into the world, but not without new resources, and for this we can only offer gratitude for the labor of reading she performs and incites. She is brilliant in the sense that she gives light without covering over what remains difficult and enigmatic. And if there is, always, inadvertent joy and surprise to be found in the turns she takes in her pages, so too is there a relentless and demanding care for words, an ethics of reading that takes us in a direction far from moralism. With Ronell, we never know precisely where we are going, but we are always willing to go. This is work that is exacting, demanding, affirmative, critical, hilarious, urgent."--Judith Butler, Maxine Elliot Professor, University of California, Berkeley

"One of the most original, bold, and surprising lines of inquiry in the contemporary academy."--Gregory Ulmer, author of Internet Invention: From Literacy to Electracy

"An intense and vivid engagement with the truly astonishing range of Ronell's oeuvre, all in one expertly curated retrospective. With its combination of brevity and power, this Ronell "primer" will be immensely useful to scholars, students, and teachers throughout the humanities, but particularly to graduate and undergraduate courses in contemporary theory."--Jeffrey T. Nealon, author of Alterity Politics: Ethics and Performative Subjectivity