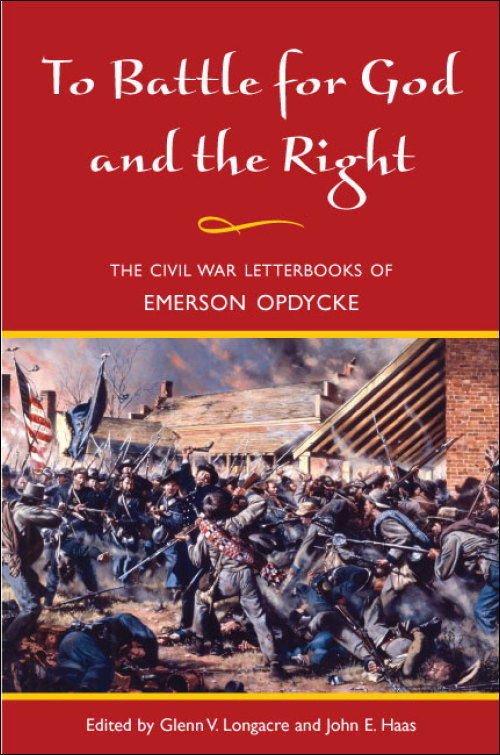 Emerson Opdycke, a lieutenant with the 41st Ohio Infantry and later a commander of the 125th Ohio Volunteer Infantry, won fame at the Battle of Franklin when his brigade saved the Union Army from defeat. He also played pivotal roles in some of the major battles of the western theater, including Chickamauga, Chattanooga, and Missionary Ridge.

Opdycke's wartime letters to his wife, Lucy, offer the immediacy of the action as it unfolded and provide a glimpse into the day-to-day life of a soldier. Viewing the conflict with the South as a battle between the rights of states and loyalty to the Union, his letters reveal his dislike of slavery, devotion to the Union, disdain for military ineptitude, and opinions of combat strategies and high-ranking officers. A thorough introduction by editors Glenn V. Longacre and John E. Haas and a foreword by Peter Cozzens provide additional historical context and biographical information.

"Glenn V. Longacre and John E. Haas are to be commended for giving us such a detailed look at the motivation, courage, and especially the political infighting of officers who served in the Army of the Cumberland. Opdycke's letters are expertly annotated with rich detail about the lives of individuals, including privates."--Journal of Southern History

"An absolute goldmine. . . . The Battle for God and the Right . . . is an absolute must for serious students of the western theater. The reader is taken beyond the bland, often self-serving reports of the Official Records and shown the behind-the-scenes personal stories."--Journal of Military History

"There are only a handful of primary sources of this depth byhigh-ranking Union officers from the western theater. Opdycke's letters are especially important because they are contemporary and intimate, not a sanitized postwar memoir. His words convey the spirit of the times and add much to our understanding of the mid-nineteenth century."--Robert Girardi, coeditor of The Military Memoirs of General John Pope