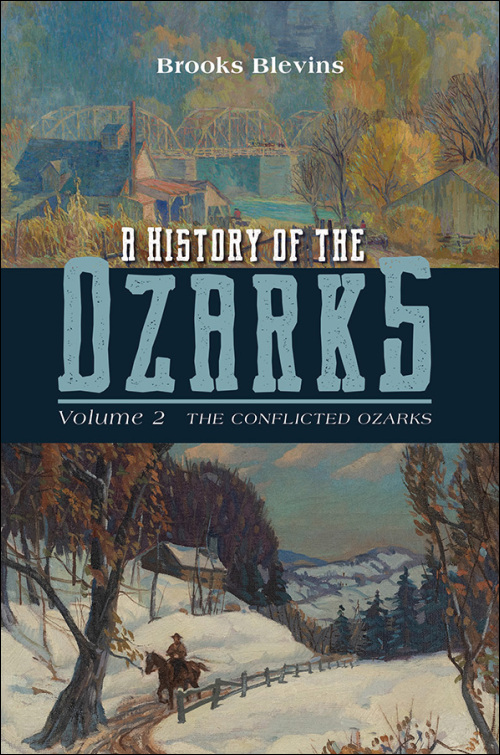 The Ozarks of the mid-1800s was a land of divisions. When the Civil War raged across the region, neighbor turned against neighbor and unleashed a generation of animus and violence that lasted long after 1865. Blending personal stories with a wide narrative scope, Brooks Blevins examines how civilians and soldiers alike experienced the war, from brutal partisan warfare to ill-advised refugee policies to women's struggles to safeguard farms and stay alive in an atmosphere of constant danger. The conflict stunted the region's growth, delaying the development of Ozarks society and the processes of physical, economic, and social reconstruction. More and more, striving uplanders dedicated to modernization fought an image of the Ozarks as a land of mountaineers and hillbillies hostile to the idea of progress. Yet the dawn of the twentieth century saw the uplands emerge as an increasingly uniform culture forged, for better and worse, in the tumult of a conflicted era.

"A well-researched and detailed account of the violent life of the Ozarks during and after the Civil War." --St. Louis Post-Dispatch

"Blevins draws on an impressive array of sources to craft a deeply researched story that he tells with insight and verve. . . . The end result is a significant contribution that surely will serve as the standard telling of the era for many years to come." --Arkansas Historical Quarterly

"With a detailed and captivating narrative, Blevins strategically inserts scholarly research to underscore his points. . . . Civil War historians and regional scholars alike will enjoy his second volume on the history of the Ozarks." --Journal of Southern History

"A History of the Ozarks will undoubtedly become the standard history of that upland region for years to come." --Northwest Arkansas Democrat Gazette

"Blevins's work is an important addition to the scholarship on the region and a much needed detailed look at the antebellum years, the Civil War, and Radical Reconstruction in the Ozark Mountain region of Missouri and Arkansas." --Arkansas Review

"Conflicted is certainly the appropriate term to capture the content and outlook of this second volume of the history of the Ozarks. . . . This engaging volume contains a wealth of local stories and personalities, while closing with a heartfelt epilogue hoping to revive the region's reputation with a literary (even romantic) flourish, referencing The Shpherd of the Hills (1907)." --Journal of American History

"No states suffered the Uncivil War more than Missouri and Arkansas, and no region of these states witnessed the fullest measure of incivility more than the Ozarks. Brooks Blevins's masterful second volume offers a fine-grain narrative of people who might be unfamiliar to many—Silas Turnbo, William Monks, Sempronius H. Boyd, Alf Bolin, William T. Leeper, Lina Hermann, and the "Bald Knobbers"—but whose powerful stories relocate this former periphery of the war and its aftermath firmly at the center of the long Civil War and Reconstruction."--Christopher Phillips, author of The Rivers Ran Backward: The Civil War and the Remaking of the American Middle Border

"Brooks Blevins’s second volume of A History of the Ozarks is the work of a premier historian and a master storyteller. Whether the topic is Civil War guerrillas or postwar Bald Knobbers, Blevins peels away the layers of myth and legend to reveal the region’s heritage and history in all its complexity. Highly recommended for both the scholar and the general reader."--William Garrett Piston, coauthor of Wilson’s Creek: The Second Battle of the Civil War and the Men Who Fought It