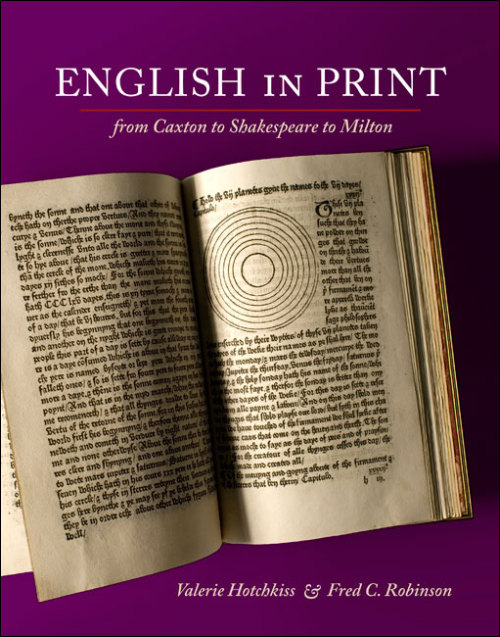 English in Print from Caxton to Shakespeare to Milton examines the history of early English books, exploring the concept of putting the English language into print with close study of the texts, the formats, the audiences, and the functions of English books. Lavishly illustrated with more than 130 full-color images of stunning rare books, this volume investigates a full range of issues regarding the dissemination of English language and culture through printed works, including the standardization of typography, grammar, and spelling; the appearance of popular literature; and the development of school grammars and dictionaries. Valerie Hotchkiss and Fred C. Robinson provide engaging descriptions of more than a hundred early English books drawn from the Rare Book and Manuscript Library at the University of Illinois, Urbana-Champaign, and the Elizabethan Club of Yale University. The study nearly mirrors the chronological coverage of Pollard and Redgrave's famous Short-Title Catalogue (1475-1640), beginning with William Caxton, England's first printer, and ending with John Milton, the English language's most eloquent defender of the freedom of the press in his Areopagitica of 1644. William Shakespeare, neither a printer nor a writer much concerned with publishing his own plays, nonetheless deserves his central place in this study because Shakespeare imprints, and Renaissance drama in general, provide a fascinating window on the world of English printing in the period between Caxton and Milton.

Valerie Hotchkiss is the head of the Rare Book and Manuscript Library at the University of Illinois, Urbana-Champaign and coeditor, with Jaroslav Pelikan, of Creeds and Confessions of Faith in the Christian Tradition. Fred C. Robinson is the Douglas Tracy Smith Professor Emeritus of English and a librarian of the Elizabethan Club at Yale University, and he is the author of The Editing of Old English.

"This erudite survey of early English printing far transcends its immediate function as catalogue of a major exhibition whose examples are taken from the shelves of the rare book collections of the University of Illinois, Urbana-Champaign, and the Elizabethan Club of Yale University. The authors have provided, in their Introduction and descriptions, a lucid and enjoyable history."--Colin Franklin, author of Book Collecting as One of the Fine Arts, and Other Essays

"We should be grateful to Valerie Hotchkiss and Fred C. Robinson for providing a widely accessible but academically rigorous review of probably the most important period of printing in England. Although there is a grand sweep of two hundred years of history, the individual stories are not ignored, and the authors and printers are brought to light with well-chosen biographical details and vignettes. Many of the books in this catalogue are visually simply delicious, and together they provide a feast to anyone who enjoys books and their history."--Stella Butler, Deputy University Librarian and Associate Director of the John Rylands Library, The University of Manchester

"English in Print from Caxton to Shakespeare to Milton is a twice-welcome addition to the book lover's shelves. It provides a succinct and clear introduction to the history of printing in English, including such neglected topics as the interaction between printing and language and the religio-political implications of this seminal technological development. And it introduces to a wider audience the riches of two distinguished collections of early English printed materials."--Milton Gatch, author of The Library of Leander van Ess and the Earliest American Collections of Reformation Pamphlets

"Stimulating from start to finish, enjoyable for the diversity of materials and the strong unity of the presentation, this volume reminds one of precisely why we are attracted to these rare books in the first place: they enliven and invigorate, as much as they record and represent, the distant past immediately before our eyes. As a historian of the book and a curator of rare books and manuscripts, I would not consider my own reference library complete without a copy of English in Print from Caxton to Shakespeare to Milton."--Earle Havens, author of Commonplace Books: A History of Manuscripts and Printed Books from Antiquity to the Twentieth Century