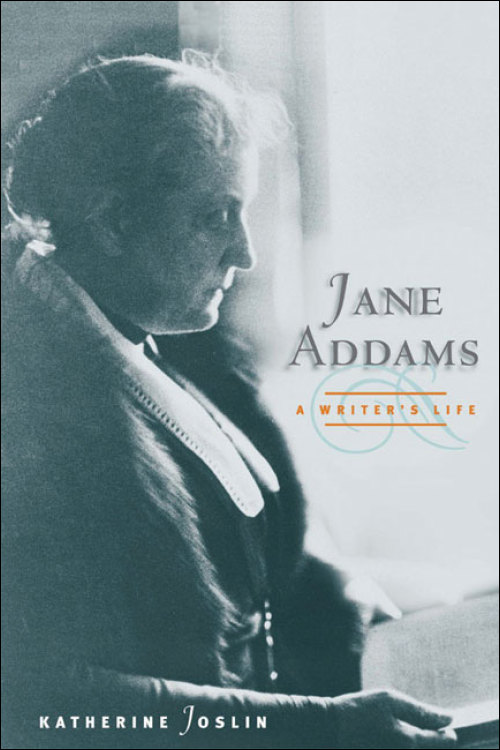 Jane Addams, a Writer's Life is an expansive, revealing, and refreshing reexamination of the renowned reformer as an imaginative writer. Jane Addams is best known for her groundbreaking social work at Hull-House, the force of her efforts toward Progressive political and social reform, and the bravery of her commitment to pacifism, for which she received the Nobel Peace Prize. Katherine Joslin moves beyond this history to present Addams as a literary figure, one whose writing employed a synthesis of fictional and analytical prose that appealed to a wide audience.

Joslin traces Addams's style from her early works, Philanthropy and Social Progress and her contributions to Hull-House Maps and Papers, influenced by Florence Kelley, to her modernist and experimental last books, The Second Twenty Years at Hull-House and My Friend, Julia Lathrop, placing Addams in the context of other Chicago writers including Theodore Dreiser, Upton Sinclair, Harriet Monroe, Frank Norris and James T. Farrell. Joslin's close readings showcase Addams's distinguishing literary devices, such as using stories about people rather than sociological argument to make moral points. As Joslin pursues the argument that Addams's power as a public figure stemmed from the success of her books and essays, Addams herself emerges as a literary woman.

Katherine Joslin is a professor of English at Western Michigan University. She is the author of Edith Wharton and coeditor of Wretched Exotic: Essays on Wharton in Europe and American Feminism: Key Source Documents, 1848-1920.

"Filled with wonderful surprises. . . . Addams emerges from this study as a woman intent upon sharing her moral vision and the world she knew with her readers."--Journal of the Illinois State Historical Society

"Joslin was scrupulous in her archival research, and her prose is lively and eminently readable. . . . Highly Recommended."--Choice

"The task of Katherine Joslin's Jane Addams: A Writer's Life is to reclaim the private woman long neglected by biographies that extol the public icon and to reposition Addams as a writer among literary figures. She does both admirably."--Grace Farrell, Legacy

“Katherine Joslin's Jane Addams, A Writer's Life is a splendidly researched and masterfully written study of what is arguably the most extensive, wide-ranging, and enduring achievement of this remarkable woman, Addams's public and personal writing. Joslin's book enables us to appreciate how essential reading and writing were to Addams's understanding of life and, more importantly, how much the persuasive power of her ideas is inseparable from the eloquence of her literary expression. ‘The fact is, Madam,’ the philosopher William James wrote in admiration, ‘that you are not like the rest of us who seek the truth and try to express it. You inhabit reality; and when you open your mouth truth can't help being uttered.’ Joslin brilliantly reveals the reality Addams inhabited and the truths she uttered.”--Carl Smith, Northwestern University

"A breakthrough interdisciplinary study of the writings of Jane Addams, set in intense cultural and intellectual context. An extremely multidimensional and creative work, it deals seriously with the entire span of Addams's creative output, from childhood writings to final publications. There is simply no other book like this--I cannot over-emphasize its contribution."--Barbara Bair, The Jane Addams Papers Project, Duke University