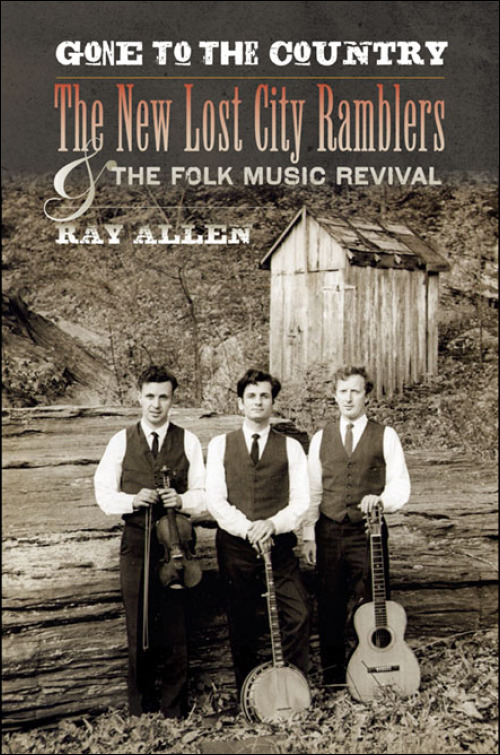 Gone to the Country

Gone to the Country chronicles the life and music of the New Lost City Ramblers, a trio of city-bred musicians who helped pioneer the resurgence of southern roots music during the folk revival of the late 1950s and 1960s. Formed in 1958 by Mike Seeger, John Cohen, and Tom Paley, the Ramblers introduced the regional styles of southern ballads, blues, string bands, and bluegrass to northerners yearning for a sound and an experience not found in mainstream music.

Ray Allen interweaves biography, history, and music criticism to follow the band from its New York roots to its involvement with the commercial folk music boom. He explores how the Ramblers ascribed notions of cultural authenticity to certain musical practices and performers and how the trio served as a link between southern folk music and northern urban audiences who had little previous exposure to rural roots styles. Highlighting the role of tradition in the social upheaval of mid-century America, Gone to the Country draws on extensive interviews and personal correspondence with band members and digs deep into the Ramblers' rich trove of recordings.

Ray Allen is a professor of music and American studies at Brooklyn College, City University of New York. His coedited collections include Ruth Crawford Seeger's Worlds: Innovation and Tradition in Twentieth-Century American Music.

"Allen has chosen the perfect example through which to document this watershed in American cultural and musical history."--Library Journal

"A rich reminiscence on the heady times in late-1950s and -1960s America, when a rediscovery of folk music flourished within and around such social issues as the civil rights movement."--Booklist

'A thorough and in-depth look at what was undeniably the most popular and influential old-time string band of the late 20th century."--Goldenseal

"A portrait of cranky eccentrics on the margins of the commercial music world. . . . The story of the New Lost City Ramblers is a crucial part of the postwar counterculture of dissidents and dropouts who worked as hard at their craft as any nine-to-fivers. They left a legacy every bit as worthy of rediscovery as that of their heroes from the hills."--The Wall Street Journal

"Allen is a gifted writer with a talent for creating a precise and highly detailed narrative that never becomes obscure. . . . A book for anyone interested in the history of American music."--PopMatters

"Sadly, Mike Seeger died a year before this book appeared. It makes a fine memorial to him, one fans and scholars alike will cherish. Recommended."--Choice

"Highly recommended. . . . It is above all a good story and it is told with care, sympathy, and good humor, and a genuine appreciation for the music."--Notes

"A richly compelling, thoughtful, and enjoyable book on folk music and its 'revival.' Allen also draws upon the complex world at large by touching on topics such as the Cold War, Vietnam, the folk revival, issues of authenticity, the Civil Rights Movement, and the impact of independent record companies."--Kip Lornell, author of The NPR Curious Listener's Guide to American Folk Music

"While the number of studies addressing the folk revival has increased steadily over the past fifteen years, this is the first scholarly work to focus on the cultural impact of a single performing group. Gone to the Country is a fascinating read."--Michael Scully, author of The Never-Ending Revival: Rounder Records and the Folk Alliance

Received a Certificate of Merit from the Association for Recorded Sound Collections (ARSC) in the category of Best Research in Recorded Country, Ethnic or Folk Music, 2011