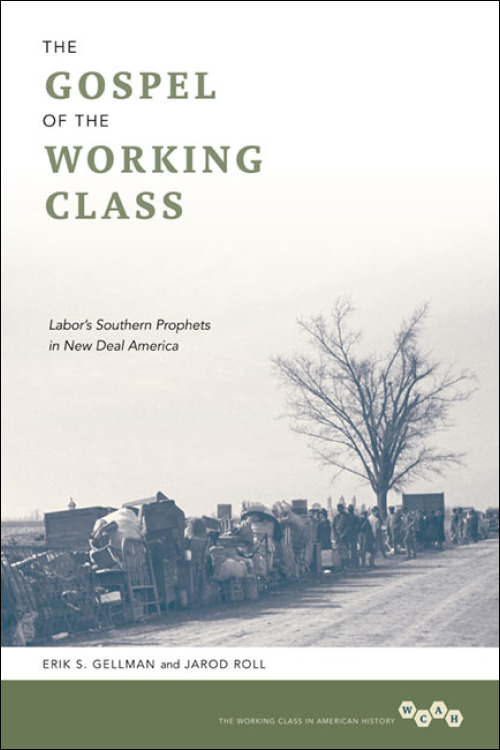 In this exceptional dual biography and cultural history, Erik S. Gellman and Jarod Roll trace the influence of two southern activist preachers, one black and one white, who used their ministry to organize the working class in the 1930s and 1940s across lines of gender, race, and geography. Owen Whitfield and Claude Williams, along with their wives, Zella Whitfield and Joyce Williams, drew on their bedrock religious beliefs to stir ordinary men and women to demand social and economic justice in the eras of the Great Depression, New Deal, and Second World War.

Williams and Whitfield preached a working-class gospel rooted in the American creed that hard, productive work entitled people to a decent standard of living. Gellman and Roll detail how the two preachers galvanized thousands of farm and industrial workers for the Southern Tenant Farmers Union and the Congress of Industrial Organizations. They also link the activism of the 1930s and 1940s to that of the 1960s and emphasize the central role of the ministers' wives, with whom they established the People's Institute for Applied Religion.

This detailed narrative illuminates a cast of characters who became the two couples' closest allies in coordinating a complex network of activists that transcended Jim Crow racial divisions, blurring conventional categories and boundaries to help black and white workers make better lives. In chronicling the shifting contexts of the actions of Whitfield and Williams, The Gospel of the Working Class situates Christian theology within the struggles of some of America's most downtrodden workers, transforming the dominant narratives of the era and offering a fresh view of the promise and instability of religion and civil rights unionism.

Erik S. Gellman is an associate professor of history at Roosevelt University in Chicago. He is the author of Death Blow to Jim Crow: The National Negro Congress and Militant Civil Rights. Jarod Roll teaches American history at the University of Sussex, England, where he directs the Marcus Cunliffe Centre for the Study of the American South. He is the author of the award-winning Spirit of Rebellion: Labor and Religion in the New Cotton South.

"A rare and extraordinary view of how the word of God has been used to champion profane as well as spiritual causes. . . . Gellman and Roll ... offer the reader a convincing, well researched and detailed account of what many who study religion and working-class life feel strongly is an unacknowledged, uplifting and muscular nexus of class and faith."--Working-Class Notes

"Grassroots labor movements, illustrated by the careers of Claude and Joyce Williams and Owen and Zella Whitfield ... are crucial to understanding southern history. Recommended."--Choice

"Essential, even urgent, reading for scholars of modern United States history. . . . This is a remarkable book."--Arkansas Historical Quarterly

"[The authors] successfully show the centrality of biblically-based notions of community and justice in their study of interracial activism among southern agricultural workers during the New Deal. Focusing on the intersecting careers of Claude Williams, a white Presbyterian minister from Tennessee, and Owen Whitfield, an African-American farmer and preacher from rural Mississippi, Gellman and Roll offer a fascinating story of labour organising and politicking that cuts across racial lines."--The Journal of Ecclesiastical History

"Gellman and Roll argue convincingly that the Southern Social Gospel movement was deeply interracial and that ministers played an important role in organizing workers during the 1930s and 1940s."--Missouri Historical Review

"The subfields of religious and labor history in the United States rarely intersect. Thanks to Erik S. Gellman and Jarod Roll, help is on the way. . . . The many ways this slim volume challenges boundaries are what make it so compelling. . . . The book not only explores overlooked combinations, such as interracial cooperation, progressive religion in the South, and the confluence of union and religious activism, but also complicates binaries that too often dominate historical analysis, including sacred and secular, black and white, rural and urban, and North and South. It is hard to imagine anyone who would not find much to learn from this story, and from the way that Gellman and Roll have told it."--American Historical Review

"Gellman and Roll should be applauded for a scholarly contribution that highlights the lives of two virtually unknown southern labor activists. . . . a staple resource for any instructor looking how to highlight how religion shaped and prompted people to act, even within the labor movement."--Labor: History of the Working Class in the Americas

"Those seeking to understand the Delta's place in the nation need to read this book."--Arkansas Review

"An engaging and well-researched study of two important southern-based social and religious activists. By exploring these remarkable lives, Gellman and Roll have contributed to the scholarship associated with what historian Jacquelyn Dowd Hall has termed 'The Long Civil Rights Movement.'"--Florida Historical Quarterly

"This is the story of heroic people, black and white, who tried to democratize the southeastern states of the USA in the years before Dr. King and the Warren Court."--Pete Seeger

"This outstanding and impressively researched study reveals the tremendous significance of Claude Williams and Owen Whitfield, two major figures in the efforts to organize southern black and white workers. Erik S. Gellman and Jarod Roll also show the significance of religion in southern working class history. There have been other studies of various religious figures who worked for social justice in the South during this era, but this is the finest one that I have read."--Nan Elizabeth Woodruff, author of American Congo: The African American Freedom Struggle in the Delta

"A remarkable, nuanced account. Gellman and Roll have accessed the lives and learning of these two activists, combining excellent writing and analysis to bring clarity and inspiration to the story. Rarely do historians write with such insight and passion. This is an exciting text for anyone interested in labor, southern, and civil rights history. It ties things together in a way that no other book has done yet."--Michael K. Honey, author of Southern Labor and Black Civil Rights: Organizing Memphis Workers and Going Down Jericho Road: The Memphis Strike, Martin Luther King's Last Campaign

Winner of the H.L. Mitchell Award from the Southern Historical Association, 2012.