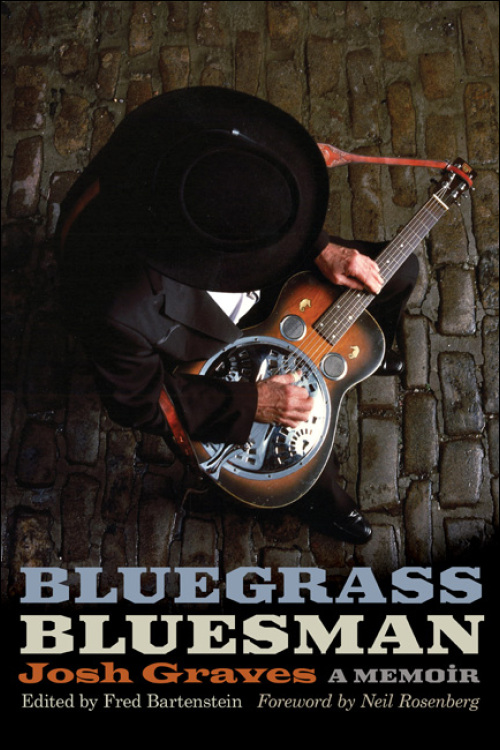 A pivotal member of the hugely successful bluegrass band Flatt and Scruggs and the Foggy Mountain Boys, Dobro pioneer Josh Graves (1927–2006) was a living link between bluegrass music and the blues, maintaining ties with black artists and comporting himself as a classic bluesman with a gold tooth and snappy headgear. In Bluegrass Bluesman, this influential performer shares the story of his lifelong career in music.

In lively anecdotes, Graves describes his upbringing in East Tennessee and the climate in which bluegrass music emerged during the 1940s. Deeply influenced by the blues, he adapted Earl Scruggs's revolutionary banjo style to the Dobro resonator slide guitar and gave the Foggy Mountain Boys their distinctive sound. Graves's accounts of daily life on tour through the 1950s and 1960s reveal the band's dedication to musical excellence, Scruggs's leadership, and an often grueling life on the road. He also comments on his later career when he played in Lester Flatt's Nashville Grass and the Earl Scruggs Revue and collaborated with the likes of Boz Scaggs, Charlie McCoy, Kenny Baker, Eddie Adcock, Jesse McReynolds, Marty Stuart, Jerry Douglas, Alison Krauss, and his three musical sons. A colorful storyteller, Graves brings to life the world of an American troubadour and the mountain culture that he never left behind. Also included are tributes from more than twenty of Josh Graves's musical contemporaries and disciples, along with material on his instruments and repertoire.

Born in Tellico Plains, Tennessee, Josh Graves (1927–2006) is universally acknowledged as the father of the bluegrass Dobro. In 1997 he was inducted into the Bluegrass Hall of Fame.Fred Bartenstein has performed many roles in bluegrass music, including magazine editor, broadcaster, musician, festival MC, talent director, scholar, and consultant. He lives in Yellow Springs, Ohio.

"Mesmerizing . . . especially for lovers of bluegrass."--Booklist

"A fascinating look at the musical culture of the South. . . . Thoroughly Southern, spicy, real, and lots of fun."--Library Journal

"Fred Bartenstein has done a beautiful job in covering the career of one of the great figures in bluegrass. . . . A hard book to put down."--County Sales Newsletter

"The legendary musician provides interesting insight into the ways of his long-time boss, Earl Scruggs."--MountainTimes.com

"Yet another must-read book from the University of Illinois Press."--Bluegrass Unlimited

"In this welcome memoir, Graves proves himself a born storyteller. . . . Rarely is a guitarist's memoir such a rich read."--Vintage Guitar

"One comes away from this interesting read with a keen understanding of a man who influenced country music, dobro playing in particular, in a way few have. Recommended."--Choice

"Because Graves tells his own story in his own voice, readers do truly get a sense for whom Josh Graves was and what he and his dobro contributed to Bluegrass music." --Winchester Sun

"An excellent autobiography of a highly creative musician. Graves was a first-rate storyteller with a discerning sense of what was important in his many memorable experiences."--John Wright, author of Traveling the High Way Home: Ralph Stanley and the World of Traditional Bluegrass Music

"Josh Graves inspired hundreds of musicians to pick up the steel bar and slide it over the strings of the Dobro. . . . It's good and fitting that the story of this talented and influential musician is being preserved in his own words."--from Neil Rosenberg's foreword to the book